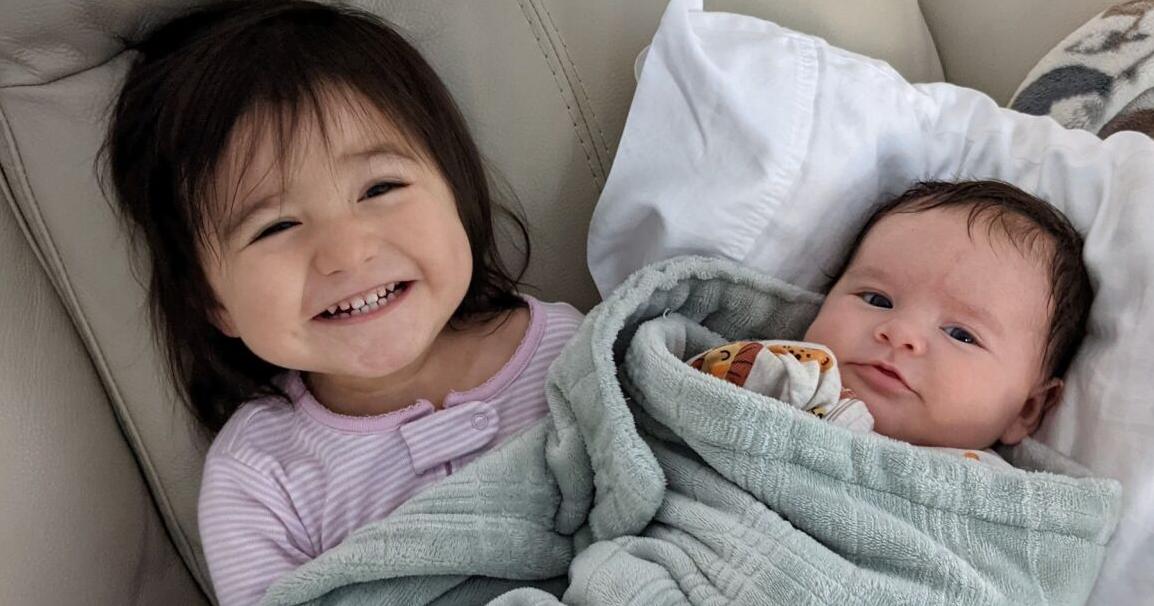 In the family photo, two-and-a-half-year-old Lyla Montañez — with a broad grin and a hint of dimples — proudly holds her little brother, Louis, on her lap.

“She has a smile that just draws you in,” said her father, Alex Montañez.

Unfortunately, it will be a while before Lyla and her brother Louis are reunited.

A recent health crisis has turned the lives of Napa’s Montañez family, which includes Alex, mother Natalie and little Louis.

Despite several visits to the doctor, “they still weren’t sure what was causing the pain,” Duncan said. After more tests, “they then found she had a tumor in her stomach.”

On March 7, Lyla was diagnosed with a neuroblastoma. Such tumors can also develop in a child’s chest, neck, pelvis, or bones.

After receiving this “unthinkable news,” doctors at UCSF Benioff Children’s Hospital quickly determined that chemotherapy should be started immediately to help shrink the tumor in her abdomen.

Lyla was able to successfully complete five days of the first cycle of chemotherapy.

However, this was not without hurdles. Lyla’s hemoglobin was very low, requiring multiple blood transfusions to help stabilize her. She also had fluid buildup in her lungs that needed to be drained, and she was put on a ventilator to help her breathe.

“My sister, Natalie, and brother-in-law, Alex, were by her side every step of the way,” Natalie’s sister Amanda Bair wrote in a blog. But the family knew they had to make practical plans for their immediate future and needs.

The idea of ​​going public was not an easy one, Duncan said.

“Natalie and Alex are very personable people,” Duncan said. “We didn’t know who they wanted to share their story with,” or just keep it among the immediate family.

But “When we realized she would be in the hospital longer than expected,” the couple agreed to have Duncan start a GoFundMe campaign to help them with the costs.

As the mother of a new baby, Natalie was already on family and medical leave from her job in the wine industry when Lyla fell ill. Alex works as a personal trainer and is not paid when he is not working.

Creating GoFundMe “will significantly help get through the coming months,” Duncan said.

All donations will help “with the stress of having to worry about how they will get by each day or whether they will have a home to come back to,” Duncan said. No one knows this better than Duncan himself.

“This is the third child in our immediate family,” Duncan says.

“My son had leukemia,” Duncan said when he was two years old about her oldest child, Jared. Another young cousin in the family had non-Hodgkin lymphoma when she was 13.

Both are doing well today.

Candace and Cole McDaniel started working in healthcare to help people. The high school sweethearts never thought they would be the ones in need of…

Supporters recently set up a GoFundMe for the Montañez family. “That got us through it,” Duncan recalled that family emergency.

Bair has posted updates about Lyla on Montañez’s GoFundMe page.

“Lyla… is one of the most caring, playful and smart two-and-a-half year olds I know,” she wrote.

“Alex stayed in the hospital around the clock and Natalie commutes daily from Napa to Oakland,” Bair wrote in a journal entry while still caring for Louis. The family lives in western Napa.

“The doctors made it clear that Lyla would need not only chemotherapy, but radiation and eventually surgery,” Bair wrote. “She still has a long way to go, but if I know one thing about this little girl, she’s a fighter! Lyla has been in ICU for 3 weeks now and we don’t know when she will return home.”

The latest journal entry for Lyla has better news.

Lyla was able to get off the ventilator and the chest tube was removed “because the CT scan showed that the bleeding had decreased significantly,” Bair wrote.

“As soon as she was extubated, she called out ‘mommy,'” she wrote. Lyla still needs extra oxygen to help her breathe, but the doctors noticed a small reduction in the size of her tumor as a result of the chemotherapy.

“She’s starting to lose some of her hair, but she’s still just as cute,” Bair wrote.

Lyla’s second round of chemotherapy began early this week.

“We are hopeful that Lyla will get a short break before her third treatment,” Bair wrote.

“She was able to color yesterday with Mom and Dad’s help holding the coloring book and they are looking forward to doing more activities with her if she can.”

That means coming home where she can see Louis again, and play with her favorite baby dolls and “everything Cocomelon,” Duncan said, referring to the animated character.

In the meantime, “Thank you so much for your continued prayers and support,” the family said.

Lyla Montañez before her cancer diagnosis.

Two and a half year old Lyla Montañez and her brother, Louis. Lyla is in a hospital in San Francisco undergoing treatments for a cancerous tumor in her stomach.

Lyla Montañez of Napa was diagnosed with neuroblastoma, or a form of cancer, in her stomach.

Support local news and the people reporting it by subscribing to the Napa Valley Register.

This Napa man had made and given away up to 1,000 birdhouses—all for free.

A Napa naturopathic doctor faces up to two decades in prison after pleading guilty Wednesday to charges of falsifying COVID-19 vaccines.

A proposed dredging plan for Napa County Flood Control District later this year will not use The Bowl, the site of a former homeless camp…

A former Napa resident imprisoned for the murder of his ex-girlfriend has had his parole recommendation revoked.

These Napa students took “We Don’t Talk About Bruno” and made it into a song about kindness.

Carefully placed boulders in a stretch of Napa River near St. Helena can mean more water for fish and other aquatic life during the dry summer months.

Most local homeowners, or potential homeowners, know it’s a seller’s market. Multiple offers, tens of thousands of dollars over the…

Judd Wallenbrock, President and CEO of C. Mondavi & Family, leads the historic winery into a new phase with the goal of making it a…

Ask the Pediatrician: Make sure your children get enough vitamin D [column] | Health