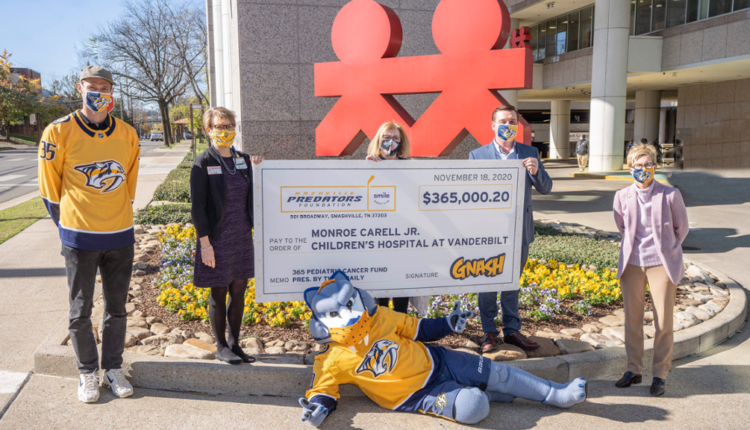 Nashville, Tennessee (November 12, 2021) – On behalf of the 365 Pediatric Cancer Fund presented by Twice Daily (the “365 Fund”), the Nashville Predators Foundation, authorized by SmileDirectClub (the “Predators Foundation”) met today, in the midst of Hockey Fights Cancer Month, to Monroe Carell Jr. Children’s Hospital in Vanderbilt (“Children’s Hospital”) a check for $335,000.21. Founded in the 2012-13 season by recently retired goalkeeper Pekka Rinne and former team captain Shea Weber, the 365 Fund has now donated more than $3.6 million in cash and in-kind contributions to the life-changing childhood cancer research underway. . in the children’s hospital.

“Our commitment to Monroe Carell Jr. Children’s Hospital in Vanderbilt and the 365 Pediatric Cancer Fund presented by Twice Daily has been unwavering over the past two very strange years,” said Rebecca King, vice president of Community Relations for Nashville Predators. “Thanks to the support of our fans, partners, collaborators and players, we were able to raise more than $50,000 more in 2020-21 than in 2019-20 when our season was cut short. We are so proud of the work the doctors and researchers can accomplish thanks to the donations to this fund. Our organization has built strong relationships and friendships with many families who have received good care and treatment at the children’s hospital. We are fortunate to have the best of the best healthcare facilities in our own backyard.”

At the presentation of the check outside, traditionally held indoors and followed by a trip to Seacrest Studios, representatives of the Predators Foundation were joined by Dr. Meg Rush, children’s hospital president, Nashville Predators Chief Operating Officer Michelle Kennedy, Twice Daily Regional Director of Operations Samuel Perry and other representatives of Children’s Hospital, as well as Predators mascot GNASH and Children’s Hospital mascot Champ. Together, those present celebrated the 365 Fund’s contribution to the Children’s Hospital and also looked back on the past two years, which have brought many challenges and uncertainties.

“Year after year, we are overwhelmed with the incredible support from the Nashville Predators and Hockey Fights Cancer,” said Debra Friedman, MD, who holds the E. Bronson Ingram Chair of Pediatric Oncology and director of the Division of Pediatric Hematology/Oncology in the children’s hospital. “The contributions raised through the team’s 365 Pediatric Cancer Fund help support our childhood cancer research, identify new ways to cure childhood cancer, and provide treatments in the best possible way for each individual child.”

Throughout the 2021-22 season, the Predators Foundation will continue its efforts to raise money for the 365 Fund through Hockey Fights Cancer nights—starting Saturday against the Arizona Coyotes—special auctions and more. On Hockey Fights Cancer nights (November 13, 2021 and April 9, 2022), Child Ambassadors will be invited to the game, not only to participate in a deluxe suite experience, but also to participate in special in-game activities such as the ride on the Zamboni and much more. All money raised during the game, an evening dedicated to the young warriors battling this terrible disease, will benefit the 365 Fund.

This season, fans in the Predators Foundation area (outside section 106/107) will also be able to purchase an ‘I FIGHT FOR’ lavender foam puck during all Predators home games to honor or commemorate someone who has been affected by cancer. For $10 they get one puck to take home and one to add to the Hockey Fights Cancer bin – which stands for all those we fight for and in memory of in Smashville. The proceeds benefit the 365 Fund. Fans can also purchase exclusive merch at the Hockey Fights Cancer Shop, bid on silent auction items by texting PREDS to 76278, or visit NashvillePredators.com/365Fund for more information.

While financial support plays a major role in the 365 Fund’s efforts, the relationships formed and memories made with the young patients and their families really give life to the mission of supporting the Children’s Hospital. Over the years, Rinne and Weber have bonded with countless patients by visiting the hospital and hosting families in the 365 Fund suite at Bridgestone Arena. In his final season in 2020-21, Rinne’s desire to find a safe way to interact with the kids led to an ongoing series of weekly virtual visits via Zoom conversations with the hospital’s Seacrest Studio. Through these visits and with the help of his teammates, Rinne continues to lift the spirits of children fighting to recover from various injuries and illnesses.

Children’s Hospital and Vanderbilt University Medical Center have always been committed to the health of our community, but as we battle COVID-19, their tireless efforts are now more recognized than ever. While the 365 Fund raises funds and awareness for cancer research, Children’s Hospital and VUMC not only provide crucial care and resources, but also healing through comfort and hope. Despite the many challenges of 2020-21, the long-standing partnership between the Nashville Predators, Children’s Hospital, and VUMC has continued to thrive and will continue to do so for many years to come.

About the Nashville Predators Foundation, powered by SmileDirectClub

About the 365 Pediatric Cancer Fund presented by Twice Daily

Presented by Twice Daily, the 365 Pediatric Cancer Fund was founded in the 2012-13 season by Predators goalkeeper Pekka Rinne and former team captain Shea Weber in partnership with the Nashville Predators Foundation, supported by SmileDirectClub. The partnership is raising funds and awareness for the vital cancer research taking place at the Monroe Carell Jr. Children’s Hospital at Vanderbilt. Since the fund’s inception, a total of more than $3.6 million in cash and in-kind donations has been made to the hospital and its programs. In addition, the 365 Fund partners with the Nashville Predators organization to brighten the lives of the hospital’s young patients and their families by providing the opportunity to meet members of the Predators team and experience the joy of hockey games at SMASHVILLE. to experience. To learn more about the 365 Pediatric Cancer Fund presented by Twice Daily, or to donate, visit NashvillePredators.com/365Fund.