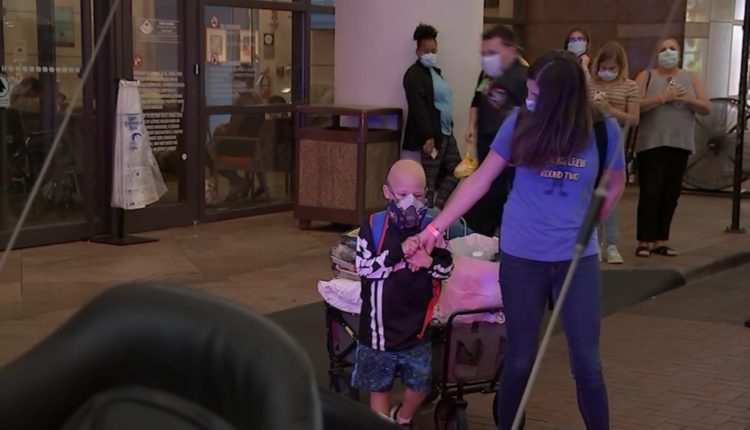 Lights, sirens, whistles and cheers were heard for Cayson Collins as he made the exit, surrounded by a motorcade for his ride home to Seabrook.

“This was crazy. I didn’t expect this,” said his mother, Courtney Collins.

Ladder trucks from the Seabrook Fire Dept. were nearby. along the street in front of his house as a crowd of neighbors cheered and waved.

At just 7 years old, Collins is in his second battle with leukemia.

“We were originally diagnosed in 2017, a month before his third birthday,” Courtney said.

As a toddler, he fought and beat cancer, and his mother said they had 18 wonderful cancer-free months until this summer.

“Went for a routine checkup in June of this year and found the cancer was back.”

A relapse into leukemia meant a more aggressive treatment plan.

“Parents who come to us after they know that the patient is having a relapse, that they need more aggressive therapy. It’s very sad and very nerve-wracking,” says Dr. Carry Martinez, the medical director of the Pediatric Bone Marrow Transplant Division. from Texas Children’s Hospital.

dr. Martinez helped treat Cayson and called him a fighter.

Courtney says Cayson’s best bone marrow match belonged to someone in Europe, but with COVID restrictions causing time delays, they had to look to the United States. Then she was tested and was a good eight out of ten match.

“I had an operation at Houston Methodist, (they) took my bone marrow cells out and he got them on Sept. 17,” Courtney said.

The transplant was so successful that Courtney said her son could go home a few weeks earlier than expected.

Although his departure from Texas Children’s Hospital was colorful and exciting, Courtney said she has found a new perspective and now cherishes life’s smaller moments.

Simone Biles to Pediatricians: ‘Speak Up’ About Sexual Abuse