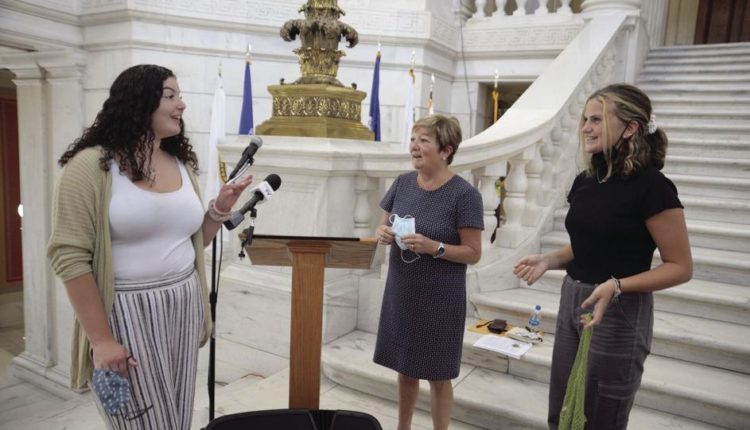 NORTH KINGSTOWN, RI – At a funeral two years ago of a girl she met in grade school, teenage Samantha “Sami” Ronci was given a difficult insight into life.

“I remember sitting there thinking to myself, this can’t happen. Children should not die. Ella should go to high school,” she said of her thoughts as a 15-year-old.

Ella Integlia, 14, had died of leukemia in August 2019 after a hard-fought battle, which brought remission at one point, but returned without giving in the next. It tapped into Ronci’s pervasive emotions and moved her to help others.

Today, that effort has spawned “Sami’s Sendoffs” of baskets full of merrymaking—be it toys, stuffed animals, Legos, or other special things—that should help kids battling cancer keep their spirits up and know they’re in their hearts. remain of many people.

Ronci (17) said she’s sent more than 85 gift baskets across the country since she started in early 2020 — and before the COVID-19 pandemic hit — and about six months after Integlia’s funeral.

The funeral and the knowledge that life can be short led to a sense of life she has had for many years, the North Kingstown High School senior said.

“When I was eight, I told my mother that I wanted to do something for children with cancer. She asked what I was going to do and how I was going to do it?” said Ronci, pointing out that cancer was a disease not found in her close relatives until now.

“So I made a poster that said, ‘Help kids with cancer,’ and my sister and I stood in her front yard and collected $200 in three days,” she said. “It was great that that was a lot of money for us.”

As the years passed, she stuck with the idea of ​​helping children with cancer, but the passing of Integlia set her thinking into action.

Her first aid went to the Navarra family who live in Virginia. She learned about them and their daughter through people involved in helping others cope with childhood cancer.

Their six-year-old daughter, Emily, had medulloblastoma and, like Integlia, the remission failed and had returned in a serious manner.

Ronci said she sent her a build-a-beer in late March 2020 to cheer her up and offer some comfort in what Ronci and the family knew were her last days. On April 15 last year, Emily died of the disease.

Emily and the many others she has found to send a gift have come through advocates for a cure for childhood cancer.

September is the month to prevent cancer in children. Although childhood cancer is rare, it is the leading cause of death from childhood illness in children in the United States.

The most common cancers are leukemias, brain and central nervous system tumors, and lymphomas. As of January 1, 2018, the most recent date for which data is available, approximately 483,000 childhood and adolescent cancer survivors were alive in the United States.

The number of survivors will continue to increase as childhood cancer incidence has risen slightly in recent decades and survival rates are improving overall. The general outlook for children and adolescents with cancer has improved significantly over the past half century, according to the institute.

Ronci was honored Tuesday by the Rhode Island General Assembly for her work. Acknowledged by state representative Julie A. Casimiro (D-Dist. 31, North Kingstown, Exeter), the teen was part of Casimiro’s effort to have the state officially recognize childhood cancer in its statewide cancer plan, Ronci said.

“Samantha brought to my attention that Rhode Island has no plan to prevent and treat childhood cancer and with her own experience helping those suffering from childhood cancer, I wanted to thank this incredible young woman for all she has done. has done to alleviate the suffering of these children. children fighting cancer,” Casimiro said.

But Ronci didn’t just stop with state recognition or getting the state planning to include it.

She recruited an 11-year-old resident of South Kingstown and a childhood cancer survivor who is also on continuous treatment to become her junior president.

Shannon McGarty has a grade 2 diffuse astrocytoma in the cerebellum. She was diagnosed when she was eight years old. Her family watched her for about a year and a half, and then her tumor, which Shannon named Birtha, started growing.

She has had two brain surgeries in the summer of 2020 and a year of stability, but the tumor is growing again. She is now undergoing chemotherapy to stop her tumor from growing, according to Ronci’s website for the program (samissendoffs.com).

McGarty told The Independent this week through her mother: “Sami is amazing doing this at such a young age. I can’t wait to help make baskets for other kids with cancer. I’ve always loved volunteering.” and this will mean a lot to me.”

Ronci said she, along with her mother, Kara, and their accountant are trying to set up a non-profit foundation so that “Sami’s Sendoffs” can continue and collect donations.

After graduating from high school in 2022, she plans to become a doctor’s assistant and then work in pediatric cancer oncology, perhaps at St. Jude’s Children’s Hospital in Tennessee.

She said some people have called her an “old soul,” a reference to those who seem to have inherent wisdom and groundedness in the world — often much more than would be expected for someone their age.

But more deeply she suspects that her Christian faith has also prompted her to some action.

“A seed was planted in my heart that was also spiritual. Little by little his has grown and now it’s blooming,” she said.