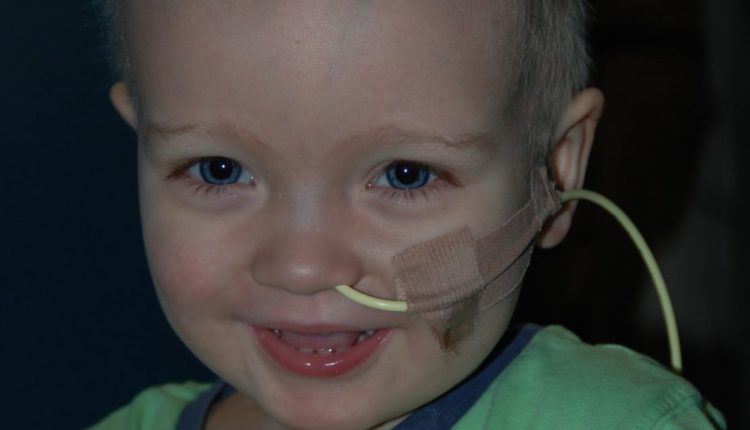 A family from Co Antrim is candid about the devastating effects of childhood cancer after losing their son to the disease.

Keeping their son’s memory alive, the Ahoghills have shared their heartbreak for Childhood Cancer Awareness Month.

The couple, who also have son Toby (16) and daughter Anna (9), said Alfie’s diagnosis came as a “terrible shock”.

They said: “From the start, Alfie was strong, robust, energetic, playful and affectionate. Alfie was a very strong, healthy baby.

“He was also a happy baby and easy to care for. He was on his way very early and took his first steps on Mark’s birthday when he was only 10 months old. It didn’t take long for him to become an experienced walker… quite a long walk. tough guy, from there he sailed through the usual toddler milestones with great enthusiasm.

“He had a daredevil approach to everything. Alfie was a happy boy. In the morning when he woke up, we heard him talking to himself through the monitor in the bed.

“When you entered his room, he would give you a beaming smile and sometimes he would scream with joy.”

The family added that the toddler’s diagnosis brought a “heavy cloud of sadness and disbelief” to their family and friends.

Dympna and Mark said: “Especially because Alfie was just a kid and was always so healthy.

“This was complicated by the fact that we had very little personal contact with any of them once Alfie was diagnosed as his immune system had been wiped out by the chemotherapy and so we had to keep people away for his protection.

“However, our families all did what they could. They were there when we needed them and of course kept in touch on a daily basis. It was very difficult for them to be alone on the edge of this horrible experience.

“When Alfie died, his loss was deeply felt by the whole family and still has an impact on them. The shadow of that time is sometimes too much to bear and they find it hard to talk about him without getting choked up .”

Mark and Dympna with their sons Toby and Alfie – the brothers’ first time seeing each other after Alfie’s diagnosis (Image: Submitted)

The toddler had to receive a very high dose of chemotherapy within a few days of his diagnosis, which was troubling for both Alfie and his family.

His parents said, “Every cycle of chemotherapy was different from the last and every chemotherapy seemed to have a pattern where he would be fine for a few days, then his blood would start to drop and then he would be pale and lethargic.

“He often needed blood and platelet transfusions to get him back on his feet. In between treatments, he had to have a wood puncture to check the leukemic cells circulating in his peripheral blood. He often got infections and had to have chest X-rays. and other drugs.

“If his blood came back up, he would start to look more like his old self. Children with cancer are so remarkable, as soon as they can, they just go on living.

“This was the pattern until we were finally told that Alfie was in remission. It was short-lived. Within six weeks he had relapsed.

“He started chemotherapy again in hopes of getting into remission for a bone marrow transplant.”

His brother Toby was a match donor, but Alfie was unresponsive to chemotherapy and two months after he suffered a relapse, the Johnstons were told he wouldn’t make it.

They took him home from the hospital to spend his last days with his loving family.

Alfie’s mom and dad explained how they keep his memory alive today.

“We’ve always been very open to talking about Alfie in our house. We haven’t turned his bedroom into a sanctuary. His bedroom will always be known as Alfie’s room, but it’s a space we can all use .

“Our daughter has always been curious about this brother she never met and so she asks to hear stories about him and often brings him into the conversation with questions like ‘I wonder what Alfie would do?’

“We are both always willing to talk about Alfie if someone asks about him. This can be very difficult at times, but people understand this,” they said.

During their hospital stay with Alfie, Dympna and Mark kept diaries in which they shared their feelings with each other.

“We had to spend a lot of time apart as a couple because one parent would be with Alfie and the other with Toby. Communication was very important.

“Since then, we have worked with our friend Malachi O’Doherty to record our experiences and other memories in a written piece alongside our journal. This has become an important reminder of our time with Alfie and will form a story for our other children in the future,” they said.

In Northern Ireland, between 60 and 70 children are diagnosed with cancer every year.

Each of these children will regularly visit the Children’s Cancer Unit at the Royal Victoria Hospital.

Mark and Dympna explained how The Children’s Cancer Unit Charity helped them through their trauma.

“Every time a child is diagnosed with cancer, apart from the obvious emotional trauma it causes for the entire family, it also brings with it many practical challenges in everyday life. We don’t always hear about those challenges The Children’s Cancer Unit Charity helps fund the dedicated support staff who help families cope with these challenges.

“All the money raised for the Children’s Cancer Unit Charity will go towards helping these families and alleviating this trauma.

“We went from a normal day-to-day life to the prospect of a long time in the unit while our son was battling leukemia. It’s such a shock in every way.

“It’s a unique community and you see so much courage and fortitude in the kids. We were able to be in the unit with Alfie every day and spend some time there together before one of us went home to be with Toby.

“The unit became our life for seven months and the support from Alfie’s nurse Katherine and the other staff such as Sophie the play therapist was a great help. The whole team is so dedicated and skilled. The staff were very enthusiastic for him and with him played, he was irresistible,” they said.

Alfie’s younger sister Anna now raises money for charity and makes and sells handicrafts to give back.

To learn more about the work of the Children’s Cancer Unit Charity, visit www.childrenscancerunit.com.

Children with cancer more likely to have severe COVID-19 illness