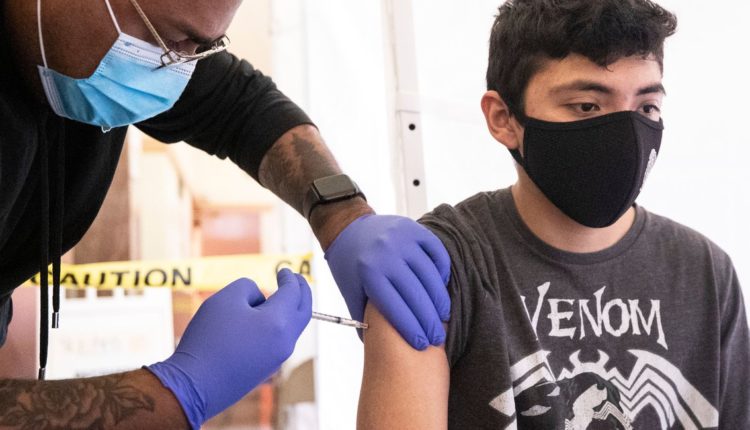 The New York state branch of the American Academy of Pediatrics has strongly urged the state to establish a COVID-19 vaccination requirement for eligible children attending public and private schools once the vaccines are fully approved by the federal government.

The group, which represents 5,000 pediatricians and related specialists in the state, said it “unequivocally supports the requirement that all children attending school, attending daycare and after-school activities be vaccinated against SARS-CoV-2 in accordance with the FDA Approval of the Right Vaccines. .”

The group’s statement added that “religious or philosophical exceptions should not be given.” New York state abolished religious exemptions from compulsory school vaccinations in 2019 following a measles outbreak.

The statement from the New York AAP was released Tuesday as the U.S. Food and Drug Administration considers Pfizer and BioNTech’s request for an emergency (EUA) approval of their COVID vaccine for children ages 5-11, with a decision due in the coming weeks. to be expected.

The New York AAP, as well as the national AAP, also recommends vaccinations under the EUA for children over the age of 12 who have no contraindications with the vaccine.

“It is imperative that we take steps now to protect as many children as possible from COVID-19 infection,” said Dr. Warren Seigel, chairman of the NYS AAP, said in a statement Tuesday. “As the CDC and FDA continue to test and approve immunization for younger children, we are committed to getting the vaccine to those children to protect them from infection and serious illness.”

The group also encouraged the continuation of other mitigation efforts in schools, including masks, social distancing and hand washing for all individuals, as well as vaccination mandates for school staff, including bus drivers, who enter school buildings or encounter students.

New York City officials have so far rejected the idea of ​​a COVID-19 vaccination requirement for schoolchildren, with Mayor Bill de Blasio saying he fears setting up another roadblock to get children back to school.

“I’m not ready, and neither is the chancellor, to exclude children who haven’t been vaccinated because their parents won’t let them vaccinate,” de Blasio said Friday on WNYC’s Brian Lehrer show. “That’s the reality. A child doesn’t have to decide, the parent has to give consent. Now 75% of teens are already vaccinated. That’s a promising sign. I think the younger kids will eventually have an even higher percentage. But I don’t go… certainly not right now — I’m not going to say a child can’t come to school if they haven’t been vaccinated because they’ve been banned from education for too long.”

The decision may not ultimately be made by De Blasio, with full federal approval of the vaccines for most school-aged children likely after he leaves office at the end of the year. (Democratic candidate for mayor, Brooklyn Borough president Eric Adams, said he would consider a student vaccine mandate once the vaccines are approved by the FDA.)

New York City must meet all school immunization requirements set by the Department of Health, raising the possibility that it will be up to Governor Kathy Hochul to decide whether New York schoolchildren should receive a COVID-19 vaccine.

Hochul said she is “willing to take a step” to eventually demand the vaccination if not enough families voluntarily have their children vaccinated.

“I’m definitely willing to look at this,” she said during her news conference on Wednesday, pointing to California’s recent announcement to add the COVID-19 vaccine to the state’s list of mandatory school vaccinations next fall.

Hochul said she wants to “encourage people first, and many pediatricians want to make it part of a child’s checkup or part of their basic routine of getting their vaccinations.”

She added: “So I’ll check that, but I’m willing to take a step if we see numbers that we’re not happy with.”