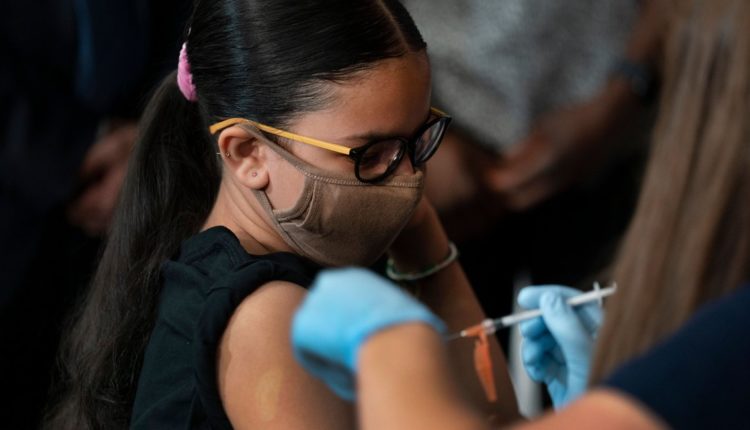 Pfizer’s coronavirus vaccine could become available next week for children ages 5 to 11, and some New York pediatricians say they expect appointment rooms to fill up quickly.

The Food and Drug Administration on Friday authorized the shot for these youths after an advisory committee voted in favor of the move earlier in the week. But pediatric doses — about one-third the size of what’s given to adults — can’t be distributed to doctors’ offices until after the Centers for Disease Control and Prevention holds a hearing to sign off next week.

Matteo Trisolini, the director of operations at South Slope Pediatrics in Brooklyn, said he started getting calls from parents asking when the vaccine will be available before it’s approved. His practice is one of hundreds in New York that have ordered more than 380,000 pediatric doses of the Pfizer vaccine to date.

“We ask our patients to be patient with us and we will get them all through the door,” Trisolini said. “We have approximately 1,400 children in our practice who are eligible [for the vaccine]. If you imagine a third of that population calling us on Monday to schedule the appointment as soon as possible, you understand what can happen.”

Pediatricians have been preparing for the vaccination rush, including some who have not previously offered a COVID-19 vaccine to adolescents, who have been eligible since May. Handling the logistics of storing the vaccine at ultra-cold temperatures and administering it without losing it can present a particular challenge for smaller practices, said Dr. Warren Seigel, president of the New York State Department of the American Academy of Pediatrics. .

For starters, he said, if a practice vaccinates both adolescents or adults and young children, they need two separate places to store the vaccines so as not to mix them up. In addition to the pediatric injection with smaller amounts of the drug, the doses also come in their own special vials. Practices also require space to observe children for 15 minutes after they have been vaccinated to ensure they do not have an allergic reaction.

He said South Slope Pediatrics began offering the Moderna vaccine for adults months ago in an effort to get a better idea of ​​what the process would look like. He noted that it was difficult to know in advance how many doses health officials would deliver in each shipment or what the delivery schedule would be.

“As soon as we get the first shipment [of the Pfizer vaccine], and we get an idea of ​​what they’re going to do, then we can adjust our order,” he said.

Complicating matters even more is that his doctor’s office doesn’t have the special freezer needed to store the Pfizer vials and keep them ultra-cold until their expiration date. They can also be kept in normal refrigeration, but only for up to two weeks.

State officials have been working with the New York chapter of the American Academy of Pediatrics for weeks to help pediatricians prepare, Governor Kathy Hochul said at a news conference Wednesday. While primary care primary care physicians were not a major part of New York’s COVID-19 vaccination strategy early in the adult rollout, officials said they would be crucial in vaccinating young children. dr. Emily Lutterloh, the state’s director of epidemiology, is leading the effort.

“We know that parents want to talk to their child’s pediatrician and have their children vaccinated where they get their other medical care,” Lutterloh said at Wednesday’s press conference alongside Hochul. “That means we need pediatricians and other doctors who see children to talk to parents and encourage those who are eligible to get the vaccine and give the vaccine in their office.”

While the injections will also be available at some pharmacies and schools, the Hochul administration currently has no plans to reopen major vaccination sites. The state is contacting individual school districts to find out what role they want to play, Hochul said. By Wednesday, 350 districts had pledged to host vaccination events, and nearly 390 said they would send information about the injections to parents.

Early demand may vary based on nearby vaccination coverage. Surveys conducted in New York City and nationwide show that parents who have self-vaccinated against COVID-19 are much more willing to vaccinate their children under 12.

For now, some pediatricians are still telling eager parents to wait a little longer.

“People say, ‘I want to make an appointment, and we say, ‘Not yet,'” said Seigel, chair of the Pediatrics Division at Coney Island Hospital. “We’re not going to give you an appointment for something we don’t have.”

Madeline Gordon’s family was rocked by her sons cancer diagnosis, now they want to help others | The Examiner