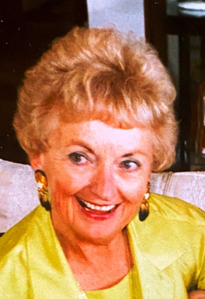 Barbara Brooks died peacefully in her home surrounded by her loved ones on November 1, 2021 in Reno, Nevada.

Barbara Brooks was born in Bremerton, Washington on December 13, 1934. She met the love of her life Neil while working at Harrahs Reno. Neil & Barbara raised four children together and lived in Stateline, NV; Anchorage, AK; & Incline Village, NV before retiring in Reno. Barbara was always involved in the community and extremely sociable. She was the president of the Incline Village Republican Women’s Club, the president of the North Lake Tahoe Women’s Club, the president of the Women’s Auxiliary at Incline Hospital, and ran the Hospital Gift Shop at the same time. Barbara also loved card games and over the years hosted and played in multiple bridge groups, hosted parties and lunches for family and friends, and had a first name for everyone who worked at Macy’s. Barbara maintained strong, long-lasting friendships with everyone close to her, and loved making those around her laugh. She was always front row at her children’s and grandchildren’s recitals, cross country meetings, sports competitions and horse shows, cheering them on the loudest. Barbara considered everyone a friend, she saw all her friends as family, and she gave her family the world.

Barbara is survived by her large and loving family; her husband Neil Brooks; her four children Steve Brooks, Patty Ruhl, Kevin Brooks & Bobby Brooks; as well as her four grandchildren Chantel Whitelaw, Trevor Williams, Brooke Ruhl & Morgan Brooks; and her three great-grandchildren Tayler Whitelaw, Theo Williams, and Tanner Whitelaw. She is also survived by her sister Sheila & nieces Valerie, Leslie, Lisa and Vicki and cousin Kevin John, as well as hundreds of friends & animals who knew and loved her. Barbara is preceded in death by her mother Vera, father Tony, sister Millie and brother Bill.

At Barbara’s request, her family plans to honor her privately in the spring at her favorite spot in Yosemite. There will also be a service open to the public on December 13, 2021 at Walton’s Funerals & Cremations Sierra Chapel, 875 W, 2nd Street, at 2:00 PM.

In lieu of flowers, donations can be made to the Northern Nevada Children’s Cancer Foundation in Barbara’s honor.