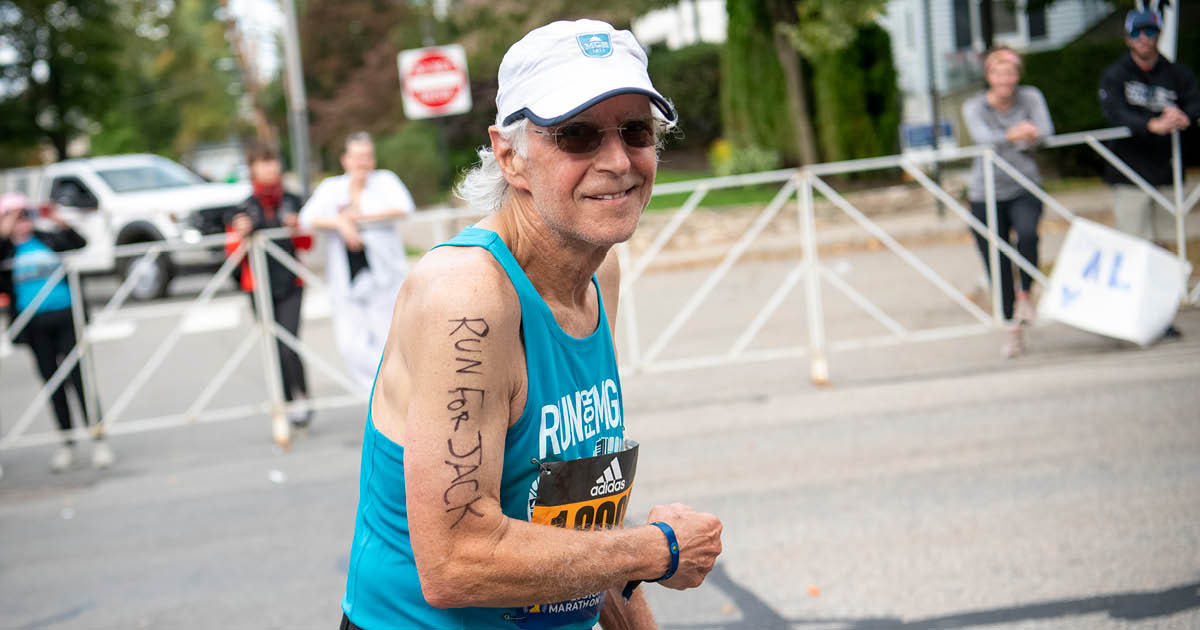 disclosures:
Weinstein does not report any relevant financial disclosures.

Other than making sure each foot lands in front of the other, there’s not much you can do during a 26.2-mile run other than let your mind wander.

Howard Weinstein, MD† director of the pediatric hematology oncology program at the MassGeneral Hospital for Children Cancer Center, often thinks of every patient he ran for in the Boston Marathon and the many others he treated during his career.

Each year, Howard Weinstein, MD, leads a team of Boston Marathon runners each representing a patient at the MassGeneral Hospital for Children Cancer Center. “I have vivid memories of every patient I’ve run for,” Weinstein told Healio. Source: Massachusetts General Hospital.

“I have vivid memories of every patient I ran for,” Weinstein told Healio. “Many are now long-term survivors; unfortunately some of them did not survive. Every year there is a very, very special memory that I put away and sometimes relive.”

Weinstein, who will run his 30th Boston Marathon on Monday at age 75, needs little motivation. He has helped raise more than $18 million for his program through the annual marathon.

“There are a lot of things that keep me going,” he said, “but the kids I ran for, the whole program (is paramount), knowing that what we do tomorrow will make a big difference, and that tomorrow will always be better than today.”

Weinstein arrived at Massachusetts General Hospital in 1996 to serve as chief of the pediatric hematology-oncology division. Two years later, he founded “Fighting Kids Cancer… One Step at a Time,” a team of Mass General runners who participate in the city’s popular spring event while raising money for their childhood cancer program.

But this program has a twist: Each runner represents and walks for an individual patient in the hospital.

In 1998, the team started with 10 bibs from partner John Hancock. Nearly a quarter of a century later, Weinstein’s team receives more than 100 charity numbers and matches about 40 to 50 of its runners with patient partners.

“Before COVID-19, we had a pasta dinner the night before the marathon. Families of the children and patients would come to dinner, as would the runners and their families,” Weinstein said. “We would hold a ceremony on the podium and runners would present a specially made Boston Marathon medal to their patient partners. There was no dry eye in the audience. There would be 40 or 50 kids on the podium with their runners, and many of the kids would wear their marathon medals for days and weeks.”

Weinstein’s path to the start line at the Boston Marathon probably wasn’t something he saw coming when he started his medical career. First, he didn’t go to high school; he played tennis.

“I had mild asthma in high school and really couldn’t run much more than a mile,” Weinstein said.

His asthma cleared up in his late twenties and eventually he started running enough that he thought to himself, “I think I can do a marathon.”

“The training is certainly not getting any easier, but I still like to do it,” he says. “I’ve probably injured every moving body part a few times, but they tend to heal.”

While he admits that 30 is a cool number for the number of marathons he’s run, it pales in comparison to the other number: $18 million in funds raised to help children with cancer.

“Our outcomes in childhood cancer have improved tremendously over the past few decades, but our research funding has never really been optimal for doing what we wanted to do,” Weinstein said. “And there’s another component to using those funds, and that’s to support children and their families through treatment. It could be through art and music therapy or other aspects of general care that are not really supported by the hospital or grants. I think it’s really critical to have such a holistic approach so they can continue to receive their care and try to maintain as normal a lifestyle as possible.”

Luckily for Weinstein, he doesn’t have to travel too far from the Boston Marathon finish to his couch for some rest and relaxation. His house is about three houses away from Mile 20.

“If a runner has a patient partner, we ask that they stop at Mile 20 for a high-five or a hug,” Weinstein said. “I stop for 4 to 5 minutes because it is not my goal to improve my time every year. For me, I know I have to go to Mile 20 and hug a dozen or more people. And that’s enough to get me to the last 6.2 miles.”

Mile 20 is also the location of another fundraising venture that started with the Weinstein family. About 20 years ago, Weinstein’s 8-year-old twins, Becca and Aaron, asked if they could run a lemonade stand.

“People gave them a $10 bill and said, ‘keep the change,’ because there was a big sign that said, ‘Support pediatric cancer at Mass General Hospital,'” Weinstein said.

After running the stand for 10 years, Becca and Aaron Weinstein handed it over to other Mass General Staff kids; Becca is now a pediatrics intern at Mass General and Aaron is in business school.

Weinstein’s other children, his patients, keep him running.

As his sneakers pound the pavement on Monday, he’ll think of both his current patients — including his patient partner this year — and the others he’s helped throughout his career.

For him, every step represents progress towards the goal of curing all cancers in children.

Weinstein estimated the cure rate to be about 70% when he ran his first marathon 30 years ago.

“Now we are at about 85% cure rates for childhood cancer; my vision is 100%,” he said. “I don’t know if we’ll get there (or) if I can run marathons anymore. But my vision is based more on curing all children with cancer than on an exact dollar amount.”

It’s easy for Weinstein to have such a lofty goal when he sees all the people at Mile 20, including the parents of children who did not survive and the children who survived, some of whom have joined the Mass General Boston Marathon team.

“For a year, we had six former patients on our team. They were all women, in their mid-20s and early 30s,” Weinstein said. “And it was so, so special and unique, to be able to run alongside some of my former patients. Really, really – I can’t even begin to describe how emotional it was and how inspiring. Just super, super special.”