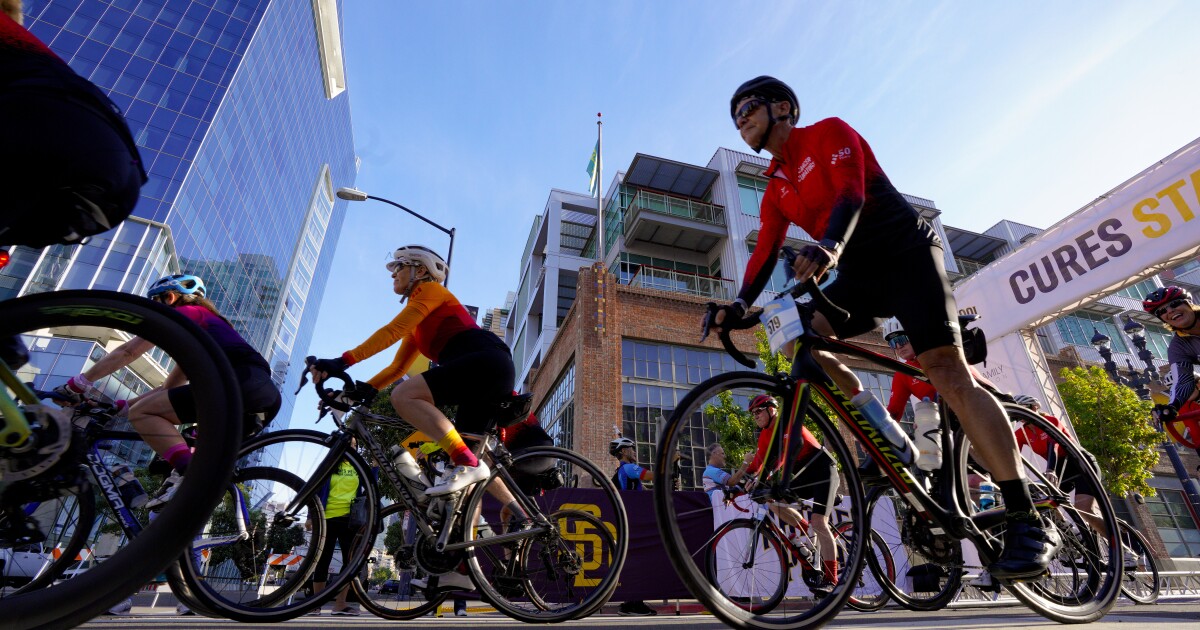 Rick Valencia and his family have long been part of Padres Pedal the Cause, which raises money for cancer research. But this year’s fundraiser hit mostly close to home. His wife, Stacey, was diagnosed with a rare form of gynecological cancer a few months ago.

Organized by their 27-year-old daughter, Aubrey, the “Race for Stace” team originally set a fundraising goal of $50,000. But they just kept going, landing on a $200,000 goal. On Saturday afternoon, they crushed that target, raising approximately $313,000 in Stacey’s name.

“I think it shows how much everyone just wants to change and find healing, but also how much everyone loves my mother,” said Aubrey, who was decked out with her teammates in a tailored shirt in orange, their favorite color. from her mother. “Like everyone else – so many people have donated in her honor.”

Their team of 40 were among more than 2,000 participants at Padres Pedal the Cause in Petco Park on Saturday to run, walk and cycle for the annual fundraiser. Curebound, a local non-profit organization, is hosting the event to raise money for joint cancer research in San Diego County.

This is the first Padres Pedal the Cause held in person since the pandemic began two years ago. Last year’s event was held virtually and raised $1.5 million for cancer research.

On the Padres Pedal, the Cause, Suhrid Bhatt, of Rancho Bernardo wrote the name of his father, Hasit. Bhatt’s father died of brain cancer in 2019.

Anne Marbarger, Curebound’s chief executive officer, said this fundraiser is unique in that the money goes to local institutions and ultimately impacts cancer research outside of San Diego.

“Our goal is to fund these early-stage ideas that (National Institutes of Health) isn’t going to give major funding to yet and help them get more data and move on to clinical stages where either a biotech can gobble it up.” , or a new business can be spun out to get the idea to the clinic,” Marbarger said.

Reuben Shaw, director of the cancer center at the Salk Institute, said federal government funding for new research is hard to come by, but Pedal the Cause is helping meet that challenge. He added that the way these Curebound grants are awarded encourages innovation and relies on the collaborative nature of San Diego’s life science community.

“It’s just so powerful … to be both the researcher pursuing things and participating in the event,” said Shaw, who cycled the 25-mile ride. “On this glorious day in San Diego, drive across the Coronado Bridge and be part of a greater community.”

In addition, the funding that will remain in San Diego will allow them to find specific solutions that can benefit local cancer patients such as 6-year-old Savannah “Savvy” Schwartz. She was diagnosed with medulloblastoma, a type of brain cancer, at age 2.

Funding for Pedal the Cause linked Savvy to precision medicine developed in part by Salk researchers.

“Without that research, without that scholarship (money), I’m not sure my daughter would be here today,” said her father, Jonathan Schwartz, “and I firmly believe it.”

Schwartz said Savvy is doing well — she’s still on chemotherapy every morning, but nothing slows her down as she ran the 5K with her mom on Saturday morning.

On the roof of the Western Metal Supply Co. in left field of Petco Park, participants who take part in a 50-minute spin workout for Padres Pedal the Cause celebrate, after completing the intense workout on Saturday, April 9, 2022.

During one of the hourly spin sessions, the Race for Stace team pedaled in unison on exercise bikes to play rousing electronic dance music. As they pedaled for nearly an hour with the midday sun on their backs, the Valencias thought of Stacey, who is recovering from surgery in hospital.

“I can’t cure (Stacey), I can’t diagnose her, I can’t fix anything that’s wrong with her, but this is something I think I can do,” said Rick Valencia. “And (fundraising is something) that I can do to help other people like her and you never know, at some point there could be something miraculous that comes out of this and can benefit her.”