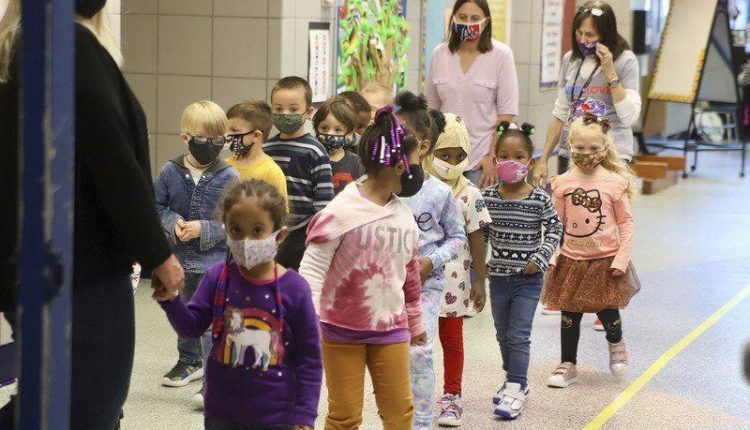 Both principals Mark Laurrie and Hank Stopinski, who work in very different districts – one in the heart of Niagara Falls and the other in the rural fields of Hartland and Royalton – are adamant about choosing to self-vaccinate and are supporters of COVID-19 vaccines as a way to keep children in school and safe.

But to force parents to give their children the opportunity? That is something completely different.

“I think there should be an encouraging peer-to-peer push,” said Laurie of Niagara Falls. “I’m not one for mandates. I think that is the choice of the parents. I believe that the parents have that right for their child.”

Laurie said the problem is even more complicated than it appears at first, because of the problems with the children in his district receiving the mumps and measles vaccinations.

“We’re still working with kids to get those pictures,” he said. “They’re not even given and… HPV, which I think is a very necessary teen shot for boys and girls. (There is a) very low number (getting). So if you impose this now, you’re really going to divide the school districts further and you’re going to get two districts: the remote and the personal, and the spacing doesn’t work well.”

Roy-Hart’s Chief Inspector Stopinski said the decision was beyond his “skills”.

“I’m in favor of vaccinating children, there’s no question about that,” Stopinski said. “I would encourage everyone to do that. A mandate is something that I think is a public health issue that I think the scientist and the health professionals should really work together and make that decision. It is not the job of a school superintendent to oblige.”

He noted that if it is mandatory, it will be treated like any other vaccine.

“All of these have been established because of public health concerns,” Stopinski said. “I’m not sure where public opinion and science is on COVID. … I want our kids to be personal five days a week, and whatever it takes is what we need to do.”

Pediatricians, too, seem wary of any mandate, even as they praise the results of the vaccines. dr. Chris Beney of Lockport spoke candidly.

“We’ve done about 2,500 tests from the office and about 13% of them are positive and I would say the majority of them are children,” Beney said. “From babies to all the way up. I think the delta variant has hit kids harder than the first Covid that was out and it certainly seems to be targeting them more than the first round. … Some of them get very sick.”

When asked about a possible mandate, Beney said he would not comment, except that one of the positives of a vaccinated population is that lives would be saved.

“Will the mandate help save lives?” he continued. “I think it’s going. A mandate would save lives. Either the lives of the children or the lives of the children’s relatives, because in most cases it goes well when the child gets Covid, but then they also spread it to their parents and we see young people getting very sick, young adults. When you vaccinate children, you vaccinate for them, but you also vaccinate them for people who are also spreading it.”

Beney continued on that thread of viral control.

“The more cases we have, the more likely we are to get more variants,” he said. “The longer you let a virus spread, the greater the chance that you will get variants of that virus. If you can prevent cases, you can prevent variants that arise from them.”

dr. Shawn Ferguson of Lewiston Village Pediatrics also weighed in on the questions surrounding children being vaccinated and whether there should be a mandate.

“Right now it’s early to say because kids can’t be vaccinated except for the older kids and I don’t think we’ve vaccinated those long enough to get a good idea of ​​how effective that has been,” he said. he. . “But we see in general, across all ages, if kids have the vaccine, they can still get Covid, but you won’t get that sick. … They are much less likely to go to the hospital. … The younger kids, because they can’t get it (the vaccination), they’re much more vulnerable.”

As a doctor, Ferguson said he has received many questions from parents about vaccinations for their children. He also noted that it may be too early to mandate the COVID-19 virus vaccines, but once mumps and measles vaccines became mandatory, they will be “incredibly effective.”

“There’s a lot of data showing that the vaccines are very safe, and there’s a lot of data showing how effective they are, but in terms of setting public health policies?” he said. “A lot of that will depend on how sick the kids get over time, but I wouldn’t be surprised…if at some point the public health officials decide to make that a mandate. At the moment I think that’s premature, but one day it could happen.”

As for the concerns, he is empathetic and does his best to provide a roadmap of what to expect.

“Most of the concerns come from misinformation in the media and social media and it seems like almost every day I hear something different that is absolutely not true and often we try to dispel this,” Ferguson said. “Often I notice in the children… after the second dose, some children get a little fever, others a little tired. That’s the majority. Most children have no symptoms at all. I just say, especially after that second dose, don’t make big plans the next day and if you’re feeling a little sick, just watch a little TV, some Netflix and you’ll be fine.”

The Niagara Frontier YWCA has many services for those in need, including helping the homeless and those coming out of abusive relationships. One of its programs is the affordable before and after school care it offers to students.

While the organization has required its staff to be “100% vaccinated,” it does not make vaccination against COVID-19 a requirement for participation.

But no lack of encouragement.

“We are very pro-vaccine organization,” said CEO Kathleen Granchelli. “From this Friday, 100% of our employees will be vaccinated. … We care for many vulnerable populations here, including children who, when it is available and safe for them, would very much wish they were vaccinated.”

Mothers turn grief into action in the fight against childhood cancer

Inspirational Yorkshire woman, 21, and her family spend five years raising £50,000 for charity that helped her with childhood cancer