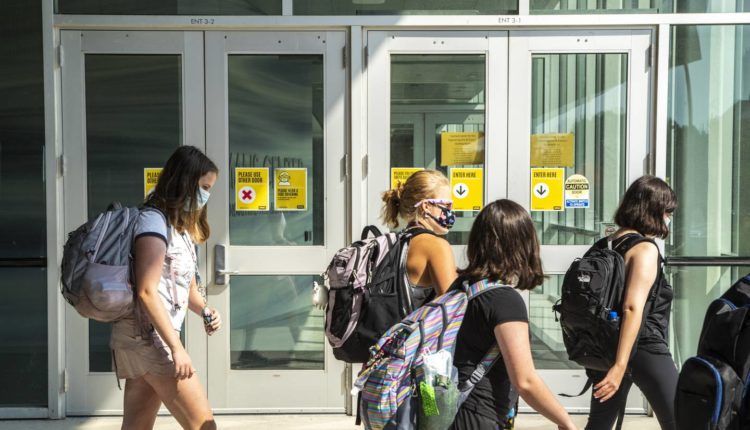 DES MOINES, Iowa — The rise of the delta variant and the new school year have dramatically increased the risks children face during the coronavirus pandemic.

The American Academy of Pediatrics and its Iowa chapter filed a brief Tuesday with the federal court judge who is considering the lawsuit 11 parents of Iowa children and the disability rights group The Arc of Iowa filed last week. It seeks to strike down a Republican-passed measure that Reynolds signed into law in May that prohibits school boards from imposing mask mandates in schools.

The group says it’s clear that universal mask policies in schools significantly reduce the spread of the coronavirus.

The AAP says cases of pediatric COVID-19 have skyrocketed since the start of the school year, with 20% of all child cases during the pandemic diagnosed between Aug. 13 and Sept. 16.

The document said more than 5.5 million total child COVID-19 cases have been reported in the United States. Iowa has reported more than 56,000 child cases, the group said.

The AAP says nationally among 45 states and New York City, Puerto Rico and Guam reporting data, 498 children have died. It says three children have died in Iowa from COVID-19. Texas leads the nation in child deaths from the virus with 79 and Arizona with 38.

MORE ON THE PANDEMIC:

— Booster shots, plus more focus on unvaccinated in US

See all of AP’s pandemic coverage at https://apnews.com/hub/coronavirus-pandemic

HERE’S WHAT ELSE IS HAPPENING:

WARSAW, Poland — Poland registered 1,234 new daily cases on Wednesday, the highest number since May. There were 22 confirmed deaths.

“Today we have crossed the fourth wave barrier, we have a significant increase from last week,” when around 800 daily cases were reported, Health Minister Adam Niedzielski told Radio Plus.

Poland is extending through October the current restrictions, including a quarantine to unvaccinated persons entering the country and wearing masks indoors in public spaces.

The government had previously warned new restrictions may be added locally, in regions with highest rise in new cases.

More than 19.2 million people in this nation of 38 million have been fully vaccinated. All vaccinated persons above age 50 are encouraged to register for a booster shot. Poland has registered more than 2.9 million confirmed cases and more than 75,500 confirmed deaths.

Dr. Michael Collins says his contract wasn’t renewed, which means Thursday is his last day after 28 years at the Grand Traverse County Health Department. Collins told the Traverse City Record-Eagle: “Nobody should be in a better position to advise than the health department.”

In August, county commissioners approved a resolution that says the county will not require a vaccination or COVID-19 test for county employees, contractors or job applicants. It says any messages about vaccines from the county will encourage people to discuss “risks and benefits” with their doctor and people can make a choice. Local health departments in Michigan typically have been urging people to get vaccinated.

Collins wrote an essay in the newspaper two days later, saying commissioners had “crossed the line from illogical opinion to irresponsibility.”

The memo from Education Superintendent Molly Spearman confirmed for districts a federal court ruling on Tuesday siding with parents of disabled students. The parents said a state ban on masks was discriminatory and they didn’t feel safe sending them to public schools without required face coverings.

U.S. District Judge Mary Geiger Lewis wrote her decision to side with the parents who sued the state with the help of The American Civil Liberties Union wasn’t a close call.

“It is noncontroversial that children need to go to school. And, they are entitled to any reasonable accommodation that allows them to do so. No one can reasonably argue that it is an undue burden to wear a mask to accommodate a child with disabilities,” Lewis wrote.

DENVER — A judge on Wednesday dismissed an attempt by a group of Denver police officers to block the city’s vaccine mandate, a day before it’s set to take effect.

In a lawsuit filed last week, seven officers claimed the city didn’t have the authority to impose the mandate under a local disaster emergency declared by Mayor Michael Hancock at the start of the pandemic, noting that Democratic Gov. Jared Polis rescinded his statewide emergency pandemic order in July.

They claim the city should have followed the longer process laid out in state law to impose regulations. However, Judge Shelley Gilman ruled that law only applies to state agencies. Under city law, the officers should have appealed the vaccine mandate, first issued on Aug. 2, at the city level before filing a lawsuit, she said. Since they didn’t, Gilman said she had no jurisdiction to decide the case and dismissed it.

Under the Denver public health order, updated Sept. 1, all city employees, workers in public and private schools and people who work for private employers such as hospitals, homeless shelters, childcare centers, must show proof that they are vaccinated. City workers face dismissal if they don’t comply.

NEW YORK — A new survey finds that vaccinated older adults are far more worried about COVID-19 than the unvaccinated.

Those vaccinated older adults are likelier to take precautions of wearing a mask, avoiding crowds and travel despite the protection afforded by their shots. That’s according to a survey from The Associated Press-NORC Center for Public Affairs Research.

The survey finds growing numbers of the unvaccinated are planning travel, embracing group gatherings and returning to gyms and houses of worship.

Kathy Paiva is a 70-year-old retired bartender from Palm Coast, Florida. She and her 67-year-old sister both fell ill with the coronavirus. Paiva, who is vaccinated, survived. Her sister, who wasn’t, did not.

“I’m scared to go anywhere right now,” she said. “I’d like to go out to eat, too, but I’m not going to put anyone’s life in danger, especially my own.”

Oliver Midgette, a 73-year-old retired electronics salesman in Norfolk, Virginia, rarely dons a mask and eats in restaurants. He says he “grew up in the old days. I ate dirt. I drank water from a hose.”

Dr. Irwin Redlener, a public health expert and founding director of the National Center for Disaster Preparedness at Columbia University, said unvaccinated people’s concerns about the virus are lower because of their “disregard for science.”

Linda Wells, a 61-year-old retired high school administrator in San Francisco, says defiance about vaccines is “selfish” and a “stubborn point of view keeps them from resolving a health crisis.”

PORTLAND, Maine — More than 75% of Maine’s population age 20 and older is fully vaccinated against coronavirus, one of the highest rates in the country.

The Maine Center for Disease Control and Prevention reported about 65% of the state’s total population is fully vaccinated. The nationwide rate is closer to 55% for the total population.

Meanwhile, Maine is dealing with an early fall surge of new cases of the coronavirus among the unvaccinated. Deaths from the virus fell in the past two weeks.

JOHANNESBURG — A report into dealings by senior officials at South Africa’s health ministry during the coronavirus pandemic has revealed corruption, fraud and the misappropriation of millions of dollars meant to aid the fight against COVID-19.

The highly awaited report by the Special Investigating Unit was released by president Cyril Ramaphosa. It found wrongdoing by former health minister Dr. Zweli Mkhize and others.

The report said Mkhize, who resigned last month, interfered in the procurement process to have a COVID-19 communications contract worth $10 million awarded to close associates. It says the associates later made payments for the benefit of Mkhize and his family.

BRATISLAVA, Slovakia — Coronavirus infections have been rising in Slovakia, reaching levels unseen for half a year.

The Health Ministry says the daily increase in new cases reached 1,459 on Tuesday, the highest number since April 7. It was 1,180 cases a week ago.

There were 14 reported deaths on Tuesday for a total of 12,620 in the nation of 5.5 million, the most since mid-June.

Also, the number of people needing hospitalization reached 531, the highest since May. The ministry says almost 85% are unvaccinated.

So far, 2.4 million people in Slovakia have received at least one shot of a vaccine, one of the lowest vaccination rates among European Union countries.

LJUBLJANA, Slovenia — Slovenia has suspended Johnson & Johnson vaccines while probing the death of a 20-year-old woman.

Health Minister Janez Poklukar on Wednesday said the suspension will be in place until all circumstances of the woman’s death are cleared. He says the woman died from a stroke two weeks after receiving the jab.

The woman’s death this week was the second serious case of adverse effects of the Johnson & Johnson jabs that have been administered to about 120,000 people in Slovenia, the official STA news agency reported.

However, Poklukar says the vaccine “benefits continue to outweigh the risks.”

The announcement is likely to fuel Wednesday’s protests in the capital, Ljubljana, against vaccination and coronavirus measures. Police used tear gas and water cannons on some protesters who tried to block a major highway.

BEIJING — A city in northern China has killed three housecats after they tested positive for COVID-19.

The authorities in Harbin say the action was taken because there was no available treatment for animals with the disease. The owner tested positive for the coronavirus on Sept. 21 and went into isolation after leaving food and water out for the three cats.

A community worker gave the cats coronavirus tests, which twice came back positive. Despite an online appeal by the owner, the cats were put down Tuesday evening.

According to the U.S. Centers for Disease Control and Prevention, the risk of animals spreading the coronavirus to people is “considered to be low.” It’s known to be transmissible from people to animals in some situations, especially when there is close contact.

“People with suspected or confirmed COVID-19 should avoid contact with animals, including pets, livestock, and wildlife,” the CDC says on its website.

MOSCOW — Russia is reporting record coronavirus deaths for the second day in a row, but authorities say they are not considering imposing nationwide restrictions.

New cases also have risen in recent weeks, increasing from about 18,000 confirmed a day in mid-September to some 22,000 this week. On Wednesday, Russia reported 22,430 new confirmed cases.

Kremlin spokesman Dmitry Peskov said the numbers are “a serious cause for concern” but nationwide restrictions aren’t currently being discussed. Peskov pointed out that regional governments are empowered to introduce their own measures and some regions are doing that in light of the surging infections.

In all, Russian authorities have reported over 7.4 million confirmed infections and more than 206,000 deaths. However, reports by the government’s statistical service Rosstat that tally coronavirus-linked deaths retroactively reveal much higher mortality numbers.

HANOI — Video footage of police officers in southern Vietnam violently escorting a women to take a COVID-19 test has gone viral as authorities requested an investigation of the case on Wednesday, local media reported.

In a video shown on the website of the state-owned Tuoi Tre newspaper, two riot police officers locked the woman’s arms behind her back in front of her crying child as they took her out of an apartment in Binh Duong province.

According to the newspaper, the officers broke the lock of the woman’s apartment after she refused to attend a routine coronavirus test at her condominium building on Tuesday.

The woman said she was busy with an online yoga class and did not want to go for the test because the testing site might be crowded, the newspaper reported.

The video shows the woman was taken to the site, where a police officer held her arms as a health officer took a swab sample.

Provincial authorities have ordered an investigation of the individuals involved in the incident, the newspaper said.

Under Vietnamese laws, people who resist procedures needed to contain contagious diseases and go on to spread the disease face up to five years in prison, but police cannot break into private household without a warrant.

Copyright 2021 The Associated Press. All rights reserved. This material may not be published, broadcast, rewritten or redistributed without permission.

Larotrectinib and The Risk of Fracture in TRK Fusion Thyroid Cancer