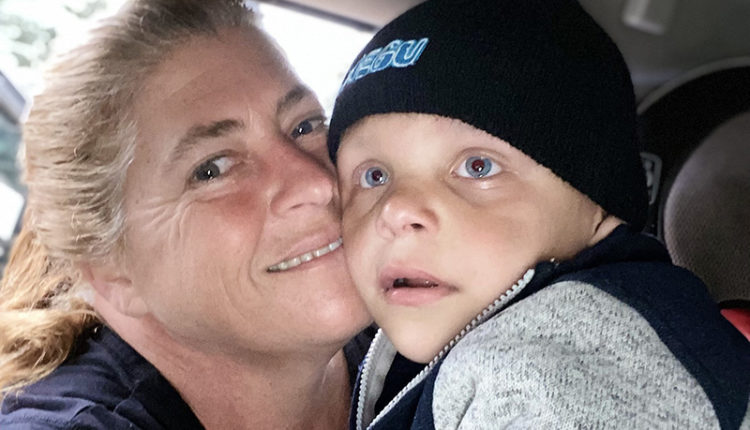 Becky Baker with her grandson, Cal, who had surgery for pleuropulmonary blastoma in February

Every time the UPS truck pulls into Becky Baker’s driveway in Lyons, New York, her 3-year-old grandson, Cal, makes sure there’s a package for him. Today, the delivery is basically for Cal – but not exactly the steerable mini-Jeep he was hoping for. “Those are your diapers, my friend,” says his grandmother, smiling lovingly. She watches as Cal hugs the UPS driver and clumsily tries to maneuver the large box.

The two are very close – Cal lives with his mother and grandmother – and have become even more so since last year, when their world became a snow globe turned upside down. One minute Cal was healthy, the next, out of breath and wheezing. Then Thanksgiving Day, the incomprehensible.

Cal loved the outdoors, Becky says. “He opens his eyes and runs outside.”

Doctors at a nearby hospital discovered a baseball-sized tumor on the top of Cal’s left lung. That tumor had a name Becky had never heard of: pleuropulmonary blastoma (PPB), a rare childhood lung cancer that forms in the tissue of the lung and the covering of the lung, known as “pleura.”

Usually, PPB is linked to a change (mutation) in the DICER1 gene. Having this mutation puts children at risk for many different tumors throughout the body, with PPB being one of the most common and most difficult to treat. One option is intensive surgery. The surgery involves removing virtually everything in the chest cavity – the lung; the pleura the diaphragm, which is attached to the pleura; and the pericardium, the covering of the heart. Then surgeons reconstruct the diaphragm using a piece of GoreTex, the same material used to make gowns, but of biological quality.

Since childhood cancer is rare and PPB is one of the rarest forms, few hospitals offer surgery for this type of tumor. However, it is a procedure that Dr. Christopher Weldon, a surgical oncologist at Dana-Farber/Boston Children’s Cancer and Blood Disorders Center, has performed dozens of times.

“Our expertise with PPB is really in the surgery,” says Dr. weldon. ‘It’s not that our chemotherapy is better. It’s not like we have a silver bullet. It’s just an operation that we’ve had success with and that will allow us to survive in the long run.”

For Becky, it was a no-brainer. The “strong little fighter,” as she calls Cal, was due to have surgery in February with Dr. weldon.

Because Cal’s tumor shrank during chemotherapy after his initial diagnosis, according to Dr. Weldon is the perfect candidate for this kind of aggressive operation. “Cal’s response to chemotherapy was so great that we were able to combine it with the best local control option – surgery – and remove the entire tumor with negative margins (no cancer cells on the outer edge of the tissue removed) and with no evidence of tumor abandoned.”

Back home and hold on hope

A week after surgery, Cal was home in New York. “He has recovered very well,” says Becky. “I don’t think he understands what’s going on. He definitely doesn’t like that he doesn’t have hair, but it’s coming back.”

Since the surgery, he has undergone several rounds of chemotherapy – a continuation of his treatment. Now he will be checked regularly for signs of cancer. “I wish I could take all his pain away,” Becky says.

Time is precious in Baker’s house.

Joy arrives in packages big and small – cruising in a bright pink jeep (thanks, UPS), playing in the yard, splashing in the water, taking the time to appreciate something as simple as the rain. And hugs: “A lot of them,” Becky says.

Recently, Cal has started kindergarten. On his first day, when his grandmother dropped him off, he begged her to go with him. “I can’t, buddy,” she says. “But here’s a hug for your pocket.” Cal smiled and tucked the stuffed toy into the pocket of his shorts for safekeeping.

Another memory, another special moment that Becky will tuck away too.

Cal at his home in Lyon, NY

Call to Action from Pediatric Leaders across the Triangle