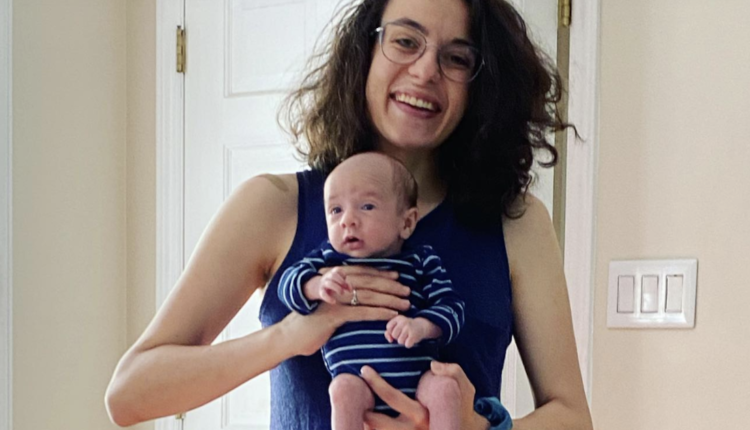 after doctors misdiagnosed her symptoms as allergies and pneumonia.

Venelina Vateva is fighting for her life as she battles stage IV ALK-positive lung cancer.

Vateva gave birth to two healthy babies after being diagnosed with cancer while she was 23 weeks pregnant. She and her wife had gotten pregnant through IUI (intrauterine insemination), a procedure in which lab-treated sperm is released from the ovary into the uterus just before it releases an egg.

The diagnosis still comes as a shock to Vateva, a 28-year-old non-smoker and wife Lindsay Saunders.

“It will never make sense because she has no family history of cancer. She has no known risk factors for cancer,” Saunders told WRAL.

Her symptoms started with a dry cough shortly after she and Saunders learned they would be welcoming twins.

“One day I got to the point where I just couldn’t walk anymore. Couldn’t breathe. It was like a sharp pain like someone stabbed me in the back,” said Vateva.

Those symptoms eventually required hospitalization, after which doctors diagnosed her with pneumonia.

Unconvinced, Vateva and Saunders insisted on a lung biopsy, a decision that may have saved the lives of Vateva and the twins.

That biopsy led doctors to diagnose Vateva with stage 4 ALK-positive lung cancer while she was 23 weeks pregnant.

Vateva started treatment while pregnant after doctors found a chemotherapy option that they believed would benefit the mother and not affect her twins.

Given the advanced state of her pregnancy, Vateva spent much of her third trimester in the hospital before delivering two healthy babies in July.

She and Saunders are now juggling raising two children with Vateva’s ongoing treatment.

The treatment is complex because of a mutation that prevents Vateva from responding to the treatment.

“It doubled in size in my lungs, and I now also have a large mass in my liver that wasn’t there before,” Vateva said.

For now, her cancer is only a secondary focus as she devotes her time and energy to her newborns.

Vateva has also returned to work so she can pay for her treatment and the cost of two new babies.

There is a tidal wave of support in the community. Residents raised more than $25,000 after learning of the couple’s plight.

The couple said it is “restoring their trust in people”.

Only about five percent of lung cancer patients have ALK-positive lung cancer, but it accounts for more than 30 percent of cancers in people under the age of 40.

Vateva was only 27 when she learned she had stage IV ALK-positive lung cancer.

ALK stands for anaplastic lymphoma kinase, a gene in the human body that is responsible for gut and nervous system functions.

The gene is turned off while in the womb, but turns back on at some point for individuals with ALK-positive lung cancer. It does this by fusing with another gene in the human body, causing the cancer to grow.

“Sometimes it presents with symptoms of metastasis. Bone pain from a spot in the bone. An attack of a spot in the brain. Some patients just don’t feel well, tired, losing weight, evidence that something is brewing until they finally get that CAT scan, brain scan, that shows a spot, a tumor, a metastasis that suggests there’s cancer.

Lung tumors in non-smokers are more likely to have mutations in a gene called EGFR or ALK. Doctors have treatments that can stop or slow the growth of cancers with these genetic traits.

People with EGFR-positive lung cancer often respond to medications that target that gene, known as “targeted therapy,” such as erlotinib (Tarceva) and gefitnib (Iressa). People with the less common ALK gene mutation can take a targeted medication that blocks the activity of that gene, such as alectinib (Alecensa), brigatinib (Alunbrig), ceritinib (Zykadia), crizotinib (Xalkori), or lorlatinib (Lorbrena).

Getting a Cancer Diagnosis While Pregnant

It is very rare for people to be diagnosed with cancer during pregnancy. The good news for people like Vateva is that cancer rarely passes from mother to child.

It is difficult to detect cancer in a pregnant woman, as almost all symptoms of the disease mirror the symptoms of pregnancy. Once cancer is discovered, there are still treatment options.

For pregnant women who need immediate treatment for their cancer, surgery is the most common and safest option. Some options, such as radiation, are never used during pregnancy because the radiation used would be harmful to the unborn child.

Doctors may delay treatment depending on when the cancer is diagnosed, as any treatment is rarely given in the first trimester. Treatment may also be delayed until after pregnancy if the cancer is in its early stages or if it is detected close to a woman’s due date.

Have a family after cancer

Chris Spargo is a senior reporter at SurvivorNet. read more

‘He loved to be connected with communities’: Lancaster pediatrician who died after hit-and-run remembered as giving, helpful | Local News