Ray of hope as 8 children are declared cancer-free 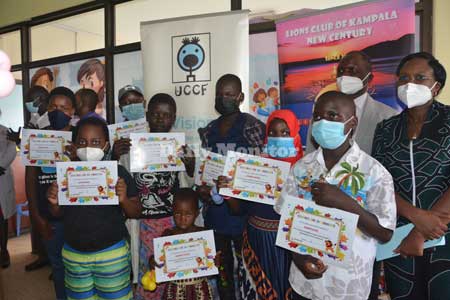 Uganda Cancer Institute has launched an initiative that aims to increase access to treatment for children affected by cancer.

This comes at a time when the Institute is working with several stakeholders, including Nation Media Group, to address treatment shortcomings.

The Institute also marked September for cancer awareness by giving eight children ages 18 and under a clean bill of health after five years of treatment.

“During cancer patient treatment, we think about what it means to have a cancer patient in your family and put more effort into making sure all of our cancer patients are cured,” says Dr. Joyce Balagadde, chief of Pediatric Oncology Services at the Institute, said.

dr. Balagadde said the Institute benefits from having a specialist surgeon for children, which was not the case before. In the past, operations often stalled because the Institute relied too much on the main Mulago hospital.

“There’s also radiotherapy, which is key in treating children with cancer and the one we have is very robust,” said Dr Balagadde, adding that the common conditions for children are kidney and heart cancer, as well as rhabdomyosarcoma.

He added: “The moment we receive a patient at the UCI, the responsibility lies with us to ensure that we combine all the knowledge and medicines we have to treat them properly. [This] must be available and of good quality so that the children are treated well.”

Patience Aturinda, a leukemia survivor, said she had not been treated for nearly five years. She said she hadn’t felt any pain since her discharge from the hospital.

“When we were released from the hospital, doctors advised my parents to keep me for a checkup for about a year until they realized I was fine,” she said.

Ms Justine Natooro, a mother of Ambrose Kavuma, said her son had breathing problems. A referral to the hospital ended with the advice of surgery.

“I was scared, but the doctor asked me to take another look to make sure the problem isn’t cancer before surgery… I was advised to go to the Mulago Cancer Institute, where they told me that the boy has cancer of the lungs and heart,” she said.

“I was scared, but the doctors kept advising me on how to handle the situation. The treatment took us four years and he is now getting better,” Ms Natooro said of her son who was discharged last year.

While Uganda’s survival rate is 50 percent, experts believe there is work to be done.

Pediatricians feeling overwhelmed as the demand for COVID tests grows