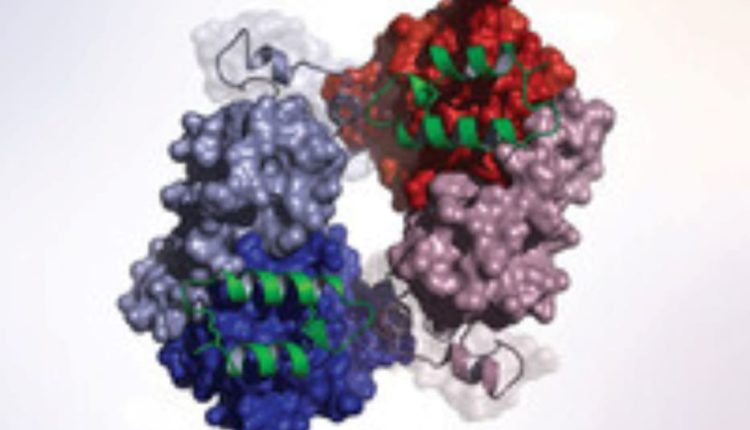 A molecule known as anaplastic lymphoma kinase (ALK) is a driver of several cancers, including pediatric neuroblastoma, B-cell lymphomas, and myofibroblast tumors. But for years, much about this molecule — its role in the body, what molecules interact with it, what it looks like — has remained unknown, limiting efforts to target it for treatment.

The ALK molecule is a receptor — a protein that sits in a cell’s membrane and responds to other molecules that bind to it — found primarily in the brain and central nervous system. For decades, it was described as an “orphan receptor” because its ligand — or the substance that binds to and activates it — was unknown until Yale researchers solved that mystery in 2015. That discovery was an important step toward understanding this receptor and the role it plays. plays in the human body.

Uncovering the structure is another leap forward, researchers say.

“To treat a receptor like this for treatment, you would want to know how to block or stimulate it, but you can’t do this unless you know its structure,” said Joseph Schlessinger, William H. Prusoff Professor of Pharmacology, chairman of Yale’s Department of Pharmacology, and member of Yale Cancer Center.

Receptors are one of the ways our bodies send signals or messages to specific cells or tissues. They react to specific substances and once those substances attach to the receptor, they cause some kind of action – the receptor can be activated or deactivated, and that action will have an impact on the cell that the receptor sits on.

Daryl Klein, an assistant professor of pharmacology, is the lead author of the first of the two new studies. In the study, he and his colleagues at the Yale Cancer Biology Institute used X-ray crystallography to visualize the part of ALK that binds to other molecules so they can see its structure.

And it turns out that the structure is very unusual — a key component had never been seen before in a human protein. “It was really, really, surprising,” Klein said.

The unexpected region consists of chains of glycine, an amino acid or a building block of protein. The region is an extremely rigid and stable part of the receptor and plays a key role in the overall positioning of ALK in the cell membrane. Klein says that mutations in this part of the receptor are linked to cancer, and understanding what these mutations do to the receptor’s structure and function will be essential to understanding how they lead to cancer.

Klein’s research team, led by postdoctoral researcher Tongqing Li and senior research scientist Steven Stayrook, was able to observe how ALK is activated upon binding to its ligand. In particular, they found that two ligand-bound ALK receptors come together, each latching onto the opposite side of the other. This joining of two molecules is known as a dimer, and once the two ALK molecules form a dimer, the receptors are activated.

That discovery, Klein said, led researchers to their next question: “How can we deactivate the receptor when it’s on but shouldn’t be, like when cancer develops?”

Using two antibodies known to interact with ALK, Klein and his team were able to do just that, by observing how the antibodies — provided by New Haven-based company Celldex Therapeutics — could enhance ALK’s function. to disturb. One prevented the ligand from binding to ALK, while the other prevented the two ALK receptors from coming together and activating.

This information will provide powerful insights for developing cancer treatments, Klein said. His team is even working on using this structure to create new therapies. “We now know exactly what we want to target to prevent the activation,” he said.

A separate study, co-led by Schlessinger’s lab and researchers at St. Jude Children’s Research Hospital, used additional methods to assess the structure of ALK. Using X-ray crystallography, cryogenic electron microscopy and nuclear magnetic resonance spectroscopy, the researchers discovered the atomic details of ALK and how it is activated by its natural ligands.

Through these techniques, the team drew the same conclusions as Klein’s – ALK has an unusual structure with unique features not seen in other receptors of the same family. Even its positioning within the cell membrane sets it apart from other receptors.

“The receptor is on the cell surface. It’s not perpendicular to the cell like most receptors are,” said Schlessinger.

This positioning, he said, allows the ligand to interact with the receptor and the cell surface at the same time. “This has never been seen before in interactions between ligands and receptors,” he said.

In addition to developing treatments, Klein’s team is also working to understand how mutations in ALK lead to cancer. And they’re tackling a question that led him to study ALK in the first place — why its ligand isn’t the same in vertebrates and invertebrates.

“Why should there be different ligands in invertebrates and vertebrates, when the receptor itself is largely the same? There must have been a huge evolutionary push to start from scratch in vertebrates — I think that’s going to be a big part of the story,” Klein said. “The answer will reveal something very interesting.”

What Is the Childhood Leukemia Survival Rate Per Age Group?