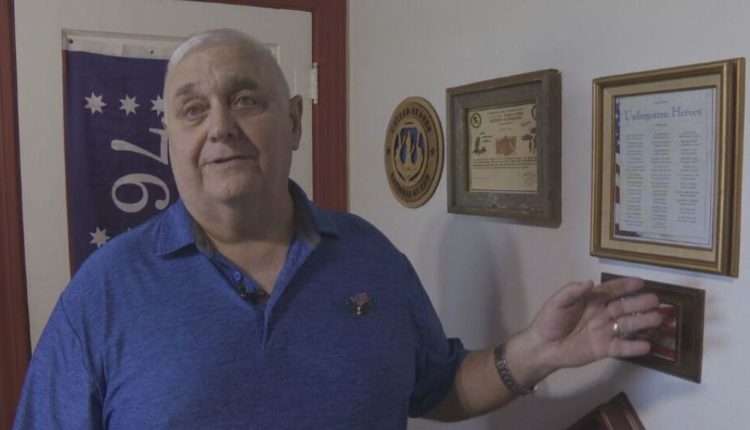 STONEWALL, LA — Rob Baker finished his theological studies and thought he would become a prison chaplain. Then I had the opportunity to become a chaplain in the army — the job of attending to spiritual needs and providing emotional support to the troops. He would be put to the test in Iraq.

On the wall of his house is a framed tribute with the names of 25 soldiers who lost his battalion in battle. About half of them are from his Louisiana unit at Fort Humbug. The other half came from New York City.

“Their battalion was next to the Twin Towers that were destroyed,” says Rob.

They would be added to Rob’s infantry brigade for deployment beginning in 2004. Ironically, the battalions faced each other during the American Civil War.

“We end up in Iraq together, fighting the global Global War on Terrorism, united.” says Rob.

Seven of the soldiers were killed in a massive roadside bomb attack. Chaplain Colonel Rob Baker would need his own chaplain.

“I sought their care at times when when they became so overwhelming to me, because they were my friends, they were my fellow soldiers.” he said.

“I had no illusions that we were going to go, we would come back unscathed, because we were fighting a determined enemy,” Rob continued.

“We were under fire all the time. We were fired on every day and then at night, with mortar rounds. Yes, and if we go outside the wire, you get sniper fire or IEDs,” he said.

Rob would earn a Bronze Star and other high medals for meritorious service in battle. And to think, he barely lived past early childhood.

“I had bone cancer for the first two, two and a half years, my life, and then they had no treatment for it,” Rob explained. “They said you could hear me screaming sometimes, almost five miles away, that I was in so much pain.

“They kept telling my mom and dad that this kid is going to die. You’re going to lose him. They said that even if a miracle happens — which it doesn’t — but even if it does, he will spend the rest of his life in a crippled Shriner orphanage,” said Rob.

“But God miraculously healed me,” he added.

“When I heard about the military chaplaincy, I said, This is it. This is what God left me here for. This is my purpose in life,” Rob said. “I’m very proud of what I’ve done. I’m very thankful that God called me to do that.”

Rob returned from the 18-month deployment and his unit was immediately reactivated to assist with Hurricane Katrina. And then in 2010, he was activated during an oil spill in the Gulf. He was eventually activated for five years.

Rob spent a total of 25 years in the military and National Guard. He also worked for the state health department for 30 years.