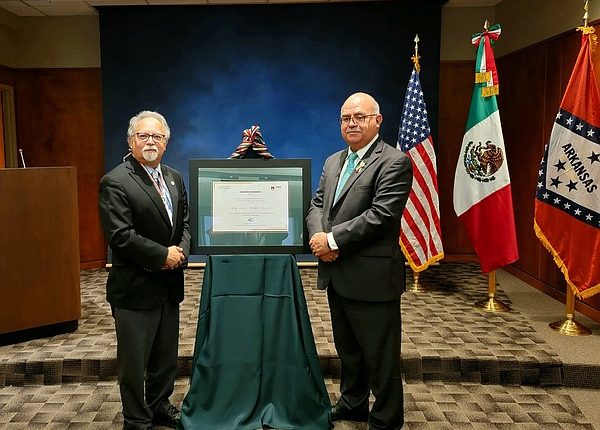 LITTLE ROCK — Dr. Jose Romero, Professor of Pediatrics in the Department of Pediatrics at the University of Arkansas for Medical Sciences, who also serves as Arkansas Secretary of Health and Director of the Arkansas Department of Health, recently received the Ohtli Award, the highest award given by the Mexican Secretariat of Foreign Affairs to individuals living outside of Mexico, according to a UAMS press release.

“Dr. Romero was chosen for this award for his unwavering commitment to ensuring equal and free access to COVID-19 vaccines,” said Rodolfo Quilantan Arenas of the Mexican Consulate in Little Rock, who presented the award to Romero. the release. “His service to the community has been invaluable.”

The name of the prize comes from the Nahuatl word meaning ‘path’, which refers to the idea of ​​opening a path for others. The Ohtli Award recognizes individuals who have helped, empowered or positively influenced the lives of Mexican citizens in the United States and other countries, the release said.

Romero is also board certified in pediatrics and pediatric infectious diseases. He is the direct chair of the Centers for Disease Control and Prevention’s Advisory Committee on Immunization Practices, which provides advice nationwide on the use of the COVID-19 vaccine. He remains a non-voting member of the ACIP Working Group on COVID-19 Vaccines. He is also a member of the American Academy of Pediatrics’ Committee on Infectious Diseases and the Infectious Diseases Policy Committee of the Association of State and Territorial Health Officials.

He previously served as Chief Medical Officer at the Ministry of Health and was appointed by Gov. Asa Hutchinson appointed as Interim Secretary of Health. He was director of the Division of Pediatric Infectious Diseases at UAMS and Arkansas Children’s from 2008-2020.