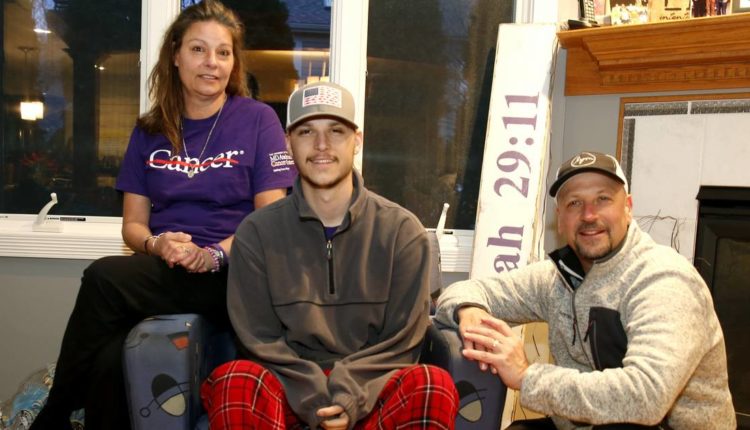 Nicky Lopez can’t come home often, but he makes it count when he does.

Kansas City Royals shortstop and Naperville Central High School graduate is in town this week to honor a fallen friend and raise money for charity. He will sign autographs at Dean’s Dugout Monday night, with all ticket proceeds going to the Justin Wegner Foundation.

Wegner, who died of a rare cancer in 2019 at age 22, was a classmate at Naperville Central who played football and baseball. Though Wegner was two years younger, Lopez got to know him after nominating Wegner as a representative to the prestigious J. Kyle Braid Leadership Foundation.

The two grew closer after Wegner’s diagnosis of desmoplastic small cell tumor sarcoma, a cancer found in the abdomen and pelvic region of the body. Since Wegner’s passing, Lopez has done his best to keep his legacy alive.

Lopez even had special cleats made for a Royals game with the #JWEGSTRONG message on them.

“He was an incredible kid, comes from an amazing family,” Lopez said. “Great work ethic, good teammate, good classmate. He was one of those people who was hard not to like.”

Wegner’s parents, Cathy and Ed, are grateful to Lopez for his efforts to help the foundation they founded. But on Monday, all they want to do is give Lopez a big hug.

Lopez enjoyed a breakout season for the Royals this year, hitting .300 and playing a nearly flawless defense despite not receiving Gold Glove consideration. But whatever Lopez achieves in the big leagues, he’s still just “Nicky” to the Wegners.

“I’ll focus on talking to Nicky, giving him a big hug and his parents,” said Ed Wegner. “And just talk to everyone in line who came out to support Nicky and Justin.”

Monday’s event at Dean’s Dugout, 2035 South Washington St., Suite 155 in Naperville, will take place from 6:30 PM to 8:00 PM. But Lopez said he will stay as long as it takes to sign as many signatures as possible. An autograph costs $25, but an upgraded $30 ticket wins entry to a raffle for signed Lopez gear used by the game. Raffle tickets are also on sale for $10 to win equipment used by the game.

It is Lopez’s latest effort to give money and publicity to the Justin Wegner Foundation. In the past, he has auctioned uniforms, hats, cleats, and all sorts of merchandise.

“It certainly makes us happy that so many people care about Justin,” said Cathy Wegner. “And they’re so willing to help us move forward with how we want to support certain organizations. It’s heartwarming.”

According to Cathy and Ed Wegner, the Justin Wegner Foundation has raised more than $50,000 through various fundraising efforts. The money will go to grants and awards at Naperville Central and Justin’s College, the University of Wisconsin-Whitewater, as well as gifts on February 11 — Justin’s birthday — for children at Lurie Children’s Hospital in Chicago.

More important, though, is the money that goes to Dr. David Waterhouse and Lurie Hospital come to pay for childhood cancer research. And more important than that is the money donated to Dr. Andrea Hayes-Jordan of the University of North Carolina.

Hayes-Jordan was Wegner’s physician, and she is one of the few people in the country who specializes in DSRCT cancer research. According to the National Cancer Institute, only about 200 cases of DSRCT have been recorded since the cancer was first described in 1989. DSRCT has a five-year survival rate of about 15%.

Despite the long chances, Lopez is ready to do what he can for the cause.

“It’s a no-brainer for me,” Lopez said. “I get this platform to not only perform at the highest level, but also to help people where I can.”