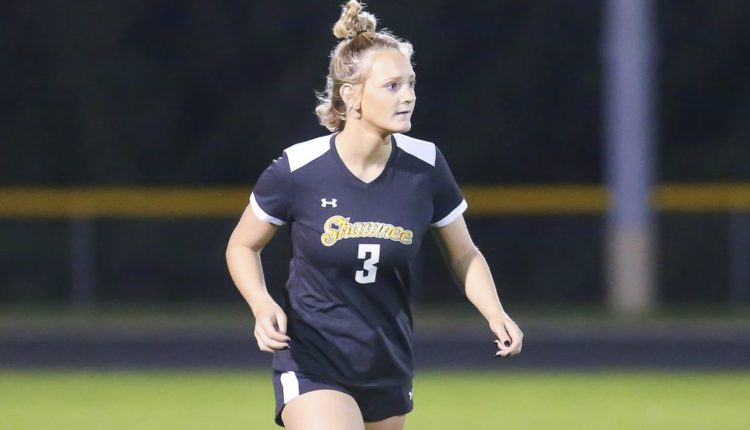 “She’s one of the toughest kids I know,” said Shawnee coach Mike Gannon. “She worked hard to get herself back so she wouldn’t let her teammates down. She’s had a great year and we really needed her. She has made a great contribution. She is a big part of what we do.”

After undergoing chemotherapy and being diagnosed cancer-free last fall, Cain worked her way back to the field for her final season. She played a key role in the Braves race to their first Central Buckeye Conference Kenton Trail Division Championship since 2017.

“It’s nice to be back in the game, in the celebrations and finally winning too,” Cain said.

While training for her junior season during quarantine, Cain started experiencing several strange symptoms, including pain in her chest and lower body and shortness of breath, but thought nothing of it, she said.

At the end of March, Cain hadn’t left her house for a month, but decided to take a trip to the supermarket. On the way there she felt a lump in her neck that didn’t feel right.

When she got home, she immediately told her parents and they took her to have it checked. After receiving X-rays and a biopsy, she was later diagnosed with Hodgkin’s lymphoma, a rare blood cancer that attacks the lymphatic system, which is part of the immune system that helps fight infections and other diseases.

On May 6 last year, she began four rounds of aggressive chemotherapy, including four 4-day overnight stays at Nationwide Children’s Hospital in Columbus. At the time, because of the pandemic, she couldn’t have anyone in the hospital with her except her mother, Brenda.

“That was probably the worst,” Cain said.

In August, she was diagnosed cancer-free but was unable to return to the field, especially during the pandemic.

“Obviously it’s no fun sitting on the bench for a whole season,” said Lily Cain. “Seeing everyone play and win and celebrate and have fun, it was tough.”

When the season started, the Shawnee girls’ soccer program continued without one of the best players and leaders, Gannon said.

“Her teammates were devastated when I told them,” Gannon said. “We played for her last year.”

About 1 in 285 children will be diagnosed with cancer by age 20, and about 20 percent of those children do not survive, according to the American Society of Clinical Oncology.

Early detection was key in Cain’s battle, she said. She wants her story to make people aware of the signs and symptoms of cancer, she said.

“When I felt (the lump), I knew something wasn’t right, it shouldn’t be there,” said Lily Cain. “It can progress very quickly. The moment you see it, you should tell your parents and make sure you go to the doctor. We got there super early.”

If detected early, Hodgkin lymphoma has a survival rate of about 95 percent.

“If we can help one person by telling this story, it’s worth it,” said Brenda Cain.

In the off-season, Cain began to prepare for her senior season. She often ran on the track with one of her best friends and former teammate, Maddie Deam, to try and get her back in shape.

“I remember I could barely run 200 meters,” Cain said.

“It took me a few games to get back into the groove and get my touch back,” Cain said. “My ankles were very weak. I would trip a lot, but I was building up my strength and now I am full (health).”

As Gannon watched Cain get back into shape, he knew she would be ready for high school season. Cain took the field for the Braves for the first time in two seasons on August 25, losing 5-2 to Greenon in their season opener.

“I was super nervous, but it felt good to be outside again,” said Lily Cain. “It was great to be back with my girls, my best friends. I wouldn’t trade that for gold.”

The Braves finished the regular season 14-2 and 10-0 in the CBC, including a 2-1 win over Northwestern on October 14 for their ninth straight win. They won the CBC Kenton Trail Division this fall for the first time since 2017, after finishing second in the previous three seasons.

Defensively, Shawnee held all five Kenton Trail opponents scoreless and finished the regular season with seven shutouts. Most importantly, she was happy to be back on the field with her teammates.

“It’s the best feeling in the world,” said Lily Cain.

How can families prepare for floods and hurricanes? [Ask the pediatrician] – Reading Eagle