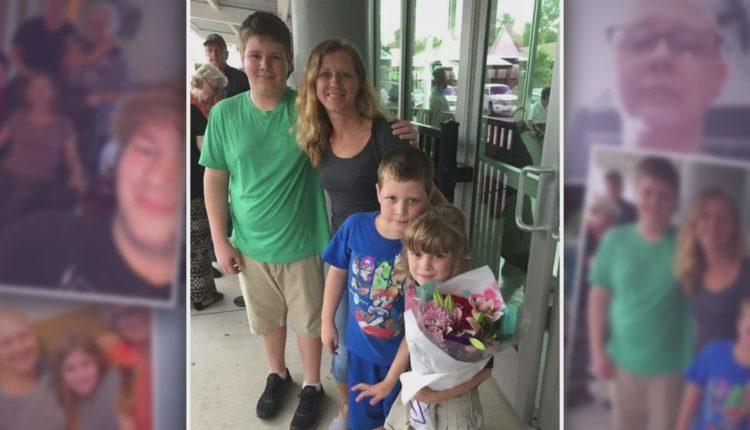 “They told me that if I got cancer, this is the one I should get because it’s very treatable. That gave me a lot of hope then, it wouldn’t be so bad.”

SLIDELL, La. – A Slidell mom in her late 40s, hoped for a chance to try an experimental treatment to save her life, but she continued to encounter obstacles that have now taken away her chances of survival.

It is a struggle that many others in her situation face. They do not have access to the latest medical treatments.

Now the system continues to disappoint a cancer patient who is running out of time.

It is a moment in time that most people take for granted. A parent sitting at the dinner table helping a child with homework. But not for a single mom of three, Nicole Harris.

“That’s the hardest. It is very difficult. It breaks my heart. I feel like I’m letting them down,” Nicolle Harris, 49, said, crying over her illness that took her away from her children.

It all started with back pain two years ago. Nicole was told it was arthritis. Several months passed. She started to go down.

Then from blood work and a bone marrow biopsy, the long-awaited diagnosis.

“I was terrified because it’s cancer,” Harris said.

“They told me that if I got cancer, this is the one I should get because it’s very treatable. That gave me a lot of hope then, it wouldn’t be so bad,” she recalls.

There was radiation, chemotherapy and a stem cell transplant. That immediately failed. Then more chemo, and more chemo, a total of eight treatments. Then new hope, a clinical trial at MD Anderson in Houston. But that hope soon faded.

“I couldn’t possibly get that kind of money. I mean, I’m sitting here with a treatment that could grip me for years, and I wouldn’t be able to get it,” Harris said through tears.

You see, Nicole is on Medicaid. Because she was so sick, she could no longer clean the houses with her boyfriend. The initial assessment in Houston was nearly $40,000. Medicaid wouldn’t pay because it was out of state.

“The state of Louisiana has had worse results than the rest of the country on a variety of cancers, and much of this is due to access to care,” said Dr. John Stewart, director of the LSU, LCMC Cancer Center.

dr. Stewart just returned to Louisiana for this position. His goal is to create a system that eliminates health disparities in cancer care.

“I think it’s unacceptable for a patient to have to leave the state to receive care for complex malignancies, and so one of the drivers for our cancer center is to provide state-of-the-art multidisciplinary cancer care at home,” said Dr Stewart.

The Louisiana Cancer Research Center is already home to many national cancer clinical trials with the latest research treatments. dr. Stewart wants to expand that program. And there, hope for Nicole was reborn. LSU Health doctors lined her up with that same Houston clinical trial that opened here in New Orleans.

“That means the world to me. It gives me hope, like I have the chance to spend a little longer with my kids. Instead of three months, I could have three years,” she said.

But just days ago, hopes shattered again. In the months-long delay, Nicole’s plasma cell numbers have plummeted. Although the clinical trial is now in her own backyard, she is no longer eligible for that new, investigational treatment. She is running out of time and already out of money.

“I’ve been trying for a year and a half just to get a handicap. I haven’t even received it yet. I was medically cleared, but not financially because all the incentive payments were in my account, so I had to start all over again and they said it could take five months or more,” Harris lamented.

But if the doctors are right, she won’t have five months. Break multiple bones. There is excruciating pain. Nicole’s mother has moved into her Slidell house to take care of her.

When asked what will help her through this ordeal, she answered crying, “My children. Yes, I don’t want to leave them behind.”

Her daughter says she gets sad sometimes and copes with being alone.

It drives her oldest, a senior in high school, and really the man of the house, to focus on grades and go to LSU, then veterinary school.

When asked where his resilience comes from, Damien Harris replied with a chuckle, “My mom and my Maw Maw. They are both hard workers.”

And while she can look at her three children with immense pride, Nicole now waits for one last chance of hope. Doctors want to change her chemotherapy medication. It has a 10 percent chance of helping.

But doctors have been waiting for Medicaid insurance approval for nearly two weeks. Two weeks: that’s an eternity in Nicole’s life.

Nicole now has lymphedema in her hip and leg. That is a buildup of fluid when the lymphatic system is blocked. The earliest a doctor from her original doctor’s office can see her is in two weeks.

Go Fund Me: The family asking for help with end-of-life care, funeral expenses and the children’s future education.

RELATED: When Her Heart Stopped Beating, This Team Lasted 25 Minutes

‘I missed my patients’: Pediatric nurse back at work after lengthy Covid-19 coma – WOAI