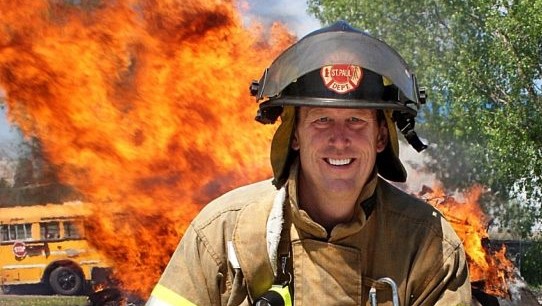 St. Paul Fire Capt. Mike Paidar loved helping people and his family hopes that a newfound determination over his death will help that legacy live on.

Minnesota Public Safety Commissioner John Harrington recently concluded that Paidar’s death from cancer was related to his job and therefore occurred in the line of duty, making his family eligible for death benefits from the public safety officer.

The appointment of Paidar, who was 53 years old, is a historic first for the state, according to the International Association of Fire Fighters Local 21. The president of the St. Paul union said it is important because research has shown that firefighters have a are at greater risk of cancer due to carcinogens to which they are exposed in their work.

“Hopefully it can open up a new avenue for families when firefighters succumb to cancer or leukemia,” said Julie Paidar, Mike’s 25-year-old wife from their job. “As heartbreaking as it is that we have had to go through this, we hope it will help others.”

Paidar became a firefighter in St. Paul in 2011 and also served as a firefighter in Maple Grove, where he lived. His path to the St. Paul Fire Department came after a successful career as a KSTP-TV photojournalist. He joined the fire service at the age of 44.

Paidar was diagnosed with acute myeloid leukemia in February 2020. He was undergoing chemotherapy and was determined to return to work, but he died on August 26, 2020. He and Julie were the parents of two children, 21 and 23.

Under the state law for death benefits of a public security officer, eligibility is based on death that occurs in the course or scope of duties and has not historically been a death from cancer, Harrington wrote to Julie Paidar in a letter that she received on Monday.

But Harrington wrote that he considered a number of factors when making the decision about Mike Paidar, including:

He was involved in 1,350 fire incidents, 1,600 fire runs and 4,800 emergency medical services. Medical records showed no health problems from 2011 to 2020. Studies “link the number of firefighters ‘burning hours’ to leukemia deaths and that the risk of leukemia death peaks earlier in a firefighter’s career for those who are more susceptible.” Paidar’s doctor stated that given his young age and “otherwise excellent health,” she concluded that it was “more likely than not that his occupational exposure led to his development of leukemia.”

“I have been in the police force for almost 40 years and I understand the dangers that public security officers face every day,” Harrington wrote to Julie Paidar. “And it seems that in your husband’s case the danger wasn’t just immediate. As such, I believe his death falls within the intended definition of “killed in the line of duty.”

According to the Department of Public Safety, the death benefit of the Minnesota Public Safety Officer was nearly $167,000 in 2020. Children can also receive benefits for higher education in the state.

It wasn’t about the money for the Paidar family, it was about helping other families, because cancer deaths in Minnesota were not officially recognized as work-related for firefighters. “We knew it was going to be an uphill battle to get this approved” because of the way the state law was written, said Mike Smith, president of Local 21.

Employee benefits in Minnesota apply to active duty firefighters who are unable to work because of cancer related to heat, radiation, or carcinogens, but there is not the same wording for death benefits. Smith said he believes the law on death benefits should change because “we are seeing more and more that firefighters have a higher risk of cancer.”

Pediatric clinics will begin administering vaccines as early as next week