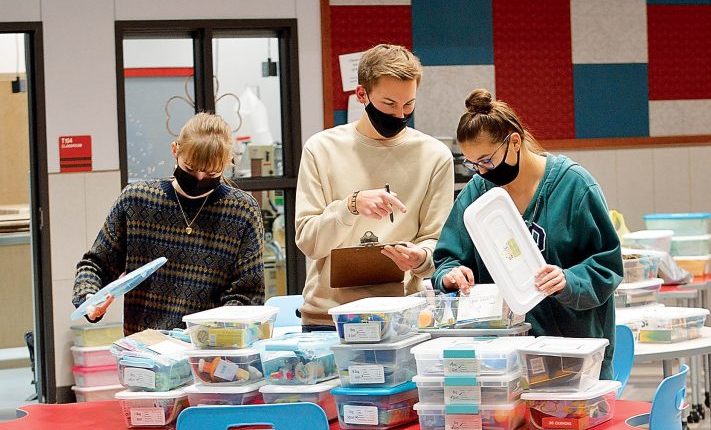 Cambria Heights seniors Molly Hayes (left), Braden Thomas and Morgan Link host Jared Boxes that will be donated to children currently in the emergency room and intensive care unit at UPMC Altoona. “We thought this would be a great way to cheer up the spirits of the kids and cheer them up a bit,” Thomas said. Mirror photo by Calem Illig

PATTON — A prospective medical student with aspirations to become a doctor, Cambria Heights senior Braden Thomas, hopes he can eventually make a positive impact on a patient’s life every day.

Although he has to make a long journey before he can put on a white coat and stethoscope, Thomas has taken the first steps to brighten up a sick child’s day.

Through the Jared Box Project, Thomas and his classmates at Cambria Heights High School donated 120 shoeboxes full of toys, gifts and other goodies to children in the emergency and intensive care unit at UPMC Altoona.

“We thought this would be a great way to cheer up the spirits of the kids and cheer them up a bit,” Thomas said. “Many children can be in hospital during the holidays, and that can of course be a very difficult time for families. I think even these little boxes can help put a smile on their face and maybe brighten their day a little bit.”

The project is named after Jared McMullen, who was 5 years old when he was diagnosed with an incurable brainstem tumor in 1999.

According to officials at the Jared Box Project, McMullen, a resident of State College, carried a backpack full of toys and games to all appointments and often asked why the other kids weren’t bringing toys to their exam rooms.

His parents, Craig and Ruth, said Jared usually shared his toys with other children and often invited them to join him in a game of Uno.

“Although he was this little boy at such a young age, he noticed other kids in the waiting room who were sad or upset, and he went out of his way to make their day better,” said Cindy Kolarik, executive director of the Jared Box Project and a close friend of the McMullen family. “He opened his backpack and shared his toys with all the other kids. He became very popular with everyone in the hospital.”

McMullen lost his battle with cancer on November 12, 2000, and since then the Jared Box Project has become a nationwide project involving schools and organizations in all 50 participating states.

The project was originally planned as a one-off deal, but when the need grew, his relatives were inspired to continue.

“Shortly after he died, we were left with an overwhelming desire to do something and honor his legacy,” Kolarik said. “He walked through this absolute nightmare with grace and faith. He was an example for us here and we wanted to pick up where he left off and provide toys for the children in the hospital.”

Thomas said he is a distant relative of the McMullen family, which he believes also fueled his passion for the project.

“This was also directly based on need,” Thomas said. “(UPMC Altoona) is running out of Jared Boxes, and about 50 per month are going through. Everything helps, and everything can make a child laugh.”

In an effort to collect as many Jared boxes as possible, Thomas organized the donation as a friendly competition between all 23 living rooms in the high school.

Rachel Manack’s senior homeroom won the match convincingly with 33 donated boxes. She said she was proud of the time and effort that all the students put into the project.

“These students really gave their best,” Manack said. “They saw a need in their community and everyone immediately embraced this project. These kids (in the hospital) are going through such a difficult and scary time right now, and I’m proud of our kids for doing something special to lift them up.”

Although she did not work directly with the students at Cambria Heights, Kolarik was impressed by their efforts.

“It’s so inspiring to see young adults stepping up and taking on a project like this,” Kolarik said. “It’s really great to see this project live and keep going.”

Thomas said that while the 120 boxes will provide an immediate boost to the hospital, there will always be a need for more donations.

He encourages other schools and organizations to join in and make the holidays easier for those in need.

“Almost every hospital has an emergency,” Thomas says. “This is something anyone can do. We need to spread the word and make a positive impact on these struggling children.”

Today’s latest news and more in your inbox