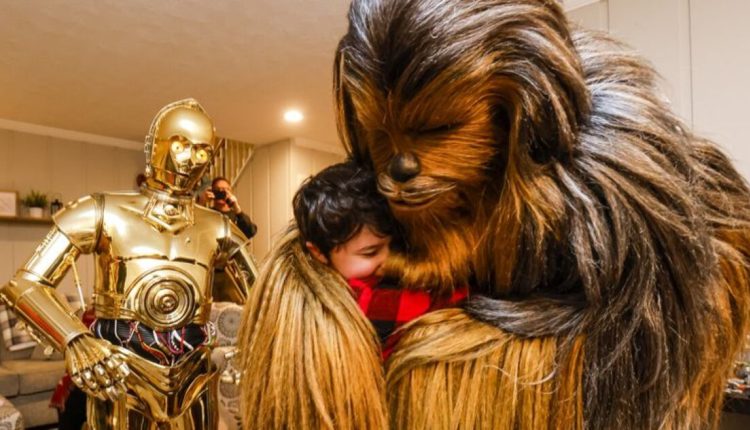 MIDDLETOWN, Ohio — When their son was diagnosed with brain cancer, Zach and Amy Sowards were overwhelmed by the support, spiritual and financial, they received from family, members of the Beracah Church, neighbors and complete strangers.

One day after returning from Cincinnati Children’s Hospital Medical Center, where their son, Porter, 10, had had his first brain surgery, they found 20 envelopes filled with gift cards, checks and words of encouragement in their mailbox.

“We didn’t even know most of the people,” said Zach Sowards. “Not even sure where they came from.”

On Friday night, the Middletown family received another gift from the community, again from complete strangers, but this time dressed as characters from their son’s favorite movie series.

Three characters from Star Wars – C3PO, Chewbacca and R2D2 – made a surprise visit to Porter and his sister Lola, 8, students of Middletown Christian School.

For about 15 minutes, while Porter asked C3PO questions and hugged Chewbacca and R2D2, he was just a kid living out a fantasy as his LEGO characters came to life instead of a 10-year-old going into an unknown battle with cancer.

“Despite everything he’s going through, this gives hope that everything will be okay,” his mother said as she stood outside. “It’s just a blessing. I believe in God and I believe God sends things like this to Porter to help with healing.”

Porter, a fifth-grader, was diagnosed with brain cancer on Sept. 17 after a CAT scan performed at Liberty Campus Children’s Hospital discovered a tumor the size of a tangerine. He was flown to Children’s Cincinnati for two surgeries for the aggressive cancer. He’s on chemotherapy.

His mother was asked what lessons she has learned over the past two months: “Be patient. We have to wait for answers, wait for all the test results. It’s not easy as a parent.”

Tim O’Sullivan, a Purple Heart recipient, is the man behind the Steven Spielberg-approved Star Wars costumes. He uses a 3D print to create the elaborate costumes.

While Joey applied Arielle black shadow around her eyes, pulled shoulder and hip pads around her petite body, and stepped into her 6-foot Chewbacca costume, O’Sullivan was in another room assembling his C3PO outfit.

O’Sullivan, face wet with sweat after the appearance, said the C3PO costume is the “most complicated, most claustrophobic” of all the costumes he’s designed. After Iraq, O’Sullivan said he needed to “find something to take my mind off my combat experience.” He found that in his 3D printer and charity appearances.

“The smile on his face,” O’Sullivan said when asked what he liked about Friday’s experience. “That is priceless. We love it. We like to do it.”

Arielle said her mother taught her that everyone is God’s children. “We’re all supposed to help each other,” she said. “Do the best we can when we can for who we can.”

C3PO, Chewbacca, and R2D2, remote controlled, waited in the basement for Porter and Lola to be led into the room.

Zach Sowards predicted that his son would “panic” and “don’t know what to do” if he saw the Star Wars characters. Instead, Porter talked to them as if they were his friends.

Hart and Condrey handed Porter several items from Team Fastrax, including a signed poster, a Dreams of Fastrax certificate for an evening flight with his family, a body flight in a covered wind tunnel, and a commemorative coin that makes him “part of our team,” Condrey said. it.

Hart told Porter, “You are loved by many people.”

Some close by and some in a galaxy far, far away…

‘All eligible children’ should get COVID-19 vax