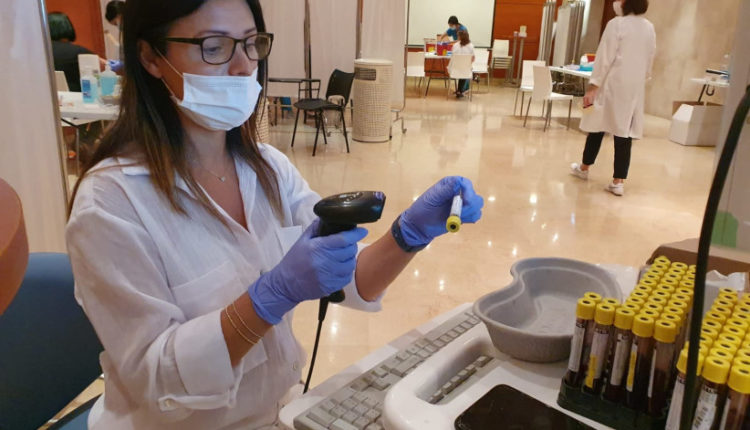 TEL AVIV — Eosinophilic esophagitis, a chronic immune disease primarily caused by food allergies, is a serious condition that affects approximately one in 2,000 children. Still, it is very difficult to diagnose.

That’s because traditionally it has taken a highly trained pathologist to analyze biopsies under a microscope — a tedious, time-consuming process that sometimes produces different results depending on who is doing the analysis.

But what if a machine instead scans the biopsies and gets the correct diagnosis every time?

An unimaginable fantasy just 20 years ago, it’s no longer science fiction – thanks to a unique new collaboration between the Technion-Israel Institute of Technology in Haifa and the Cincinnati Children’s Hospital Medical Center in Ohio.

Launched in September, the academic venture, officially known as the Bridge to Next Generation Medicine, aims to revolutionize pediatrics through Technion’s technological prowess, including world-renowned expertise in computational science and artificial intelligence, with physicians and scientists focused on understanding and treating childhood diseases.

The hope is that together they will come up with new ways to diagnose and treat childhood diseases.

“It’s an exciting partnership that brings together people who wouldn’t normally work together — especially computer scientists with computational biologists and pediatric scientists focused on better understanding childhood disease treatment,” said the principal visionary behind the partnership, Dr. Marc. Rothenberg, director of the Allergy and Immunology Department at the Children’s Hospital.

For example, when dealing with eosinophilic esophagitis, a microscopic examination by a doctor may take 20 or 30 minutes. But a computer could do it automatically and work 24/7, and it’s constantly learning.

With the new partnerships between the Technion and Cincinnati Children’s, the analysis could take place within minutes of purchasing the microscopic slide, and it could happen over great distances — in this case, the Atlantic Ocean.

Combining science with big data, in particular, could help unleash a toolbox to solve unmet global pediatric needs, ranging from ultra-rare diseases to common diseases such as asthma, cancer and autism, Rothenberg said.

“Research has become much more complex and involves large data sets,” Rothenberg said. “Having approaches that encompass expertise in computational science and AI — which is a strength of Technion — allows us to apply them to understand disease in revolutionary ways.”

Rothenberg, a global expert on inflammatory diseases, came up with the idea for the collaboration during a sabbatical at the Technion and its associated hospital, Rambam, also in Haifa.

Two Israeli scientists, professors Yonatan Savir and Shai Shen-Orr, will lead the project on the Technion side.

Savir specializes in the use of artificial intelligence for health applications. His lab at the Technion developed unique algorithms to monitor patients remotely for COVID-19 symptoms, among other things.

“My lab is unique in that we have people doing molecular biology along with people with backgrounds in engineering and computational biology,” Savir said. “Our underlying fundamental research goal is to understand how biological systems age and fail. The aging process is so complicated and there are so many moving parts.”

Machine learning and AI can do different things for medicine, Savir explained. First, AI can help doctors make better decisions based on current biomarkers — molecules in blood, tissues, or body fluids that suggest some abnormality or help determine how well a body is responding to a particular type of treatment. AI can also reveal biomarkers that are otherwise not immediately apparent.

“In recent years, more and more clinics have the ability to scan slides of biopsy images, and biopsies are one of the most important tools we have for diagnostics,” Savir said.

Shen-Orr leads the laboratory for immunology and precision medicine at Technion’s Rappaport Faculty of Medicine. Among other things, he co-founded CytoReason, an AI-driven company that partners with some of the world’s largest pharmaceutical companies, including Pfizer and Sanofi.

“Generating big data in biology is no longer a problem. You can now sequence a genome for less than $1,000,” he said. “But basically you only understand 5-10% of the genome. The problem is getting insight. That’s where computer science comes in, and machine learning comes in.” is just one approach.”

The Technion is Israel’s premier academic incubator for high-tech startups. University officials hope the partnership with the children’s hospital will help turn what is already one of America’s leading hospitals into a vector for Israeli companies working on medical applications.

Currently, the collaboration between Technion and the Cincinnati Hospital involves approximately 20 Technion researchers. As applications for proposals are submitted, officials expect potential areas of collaboration to grow, including areas such as the development of stents and other biomedical devices.

Founded in 1931 as the nation’s first pediatric research facility, Cincinnati’s Children’s Hospital is consistently ranked among the best pediatric medical facilities in the United States. The partnership with Technion was announced at an online event in September.

“But we’re not a university, so we don’t have the strengths that Technion has in terms of technology,” Rothenberg said in an interview. “We think this is a unique partnership and we hope the only limit is the amount of funding we can raise.”

This story is sponsored and produced in conjunction with the American Technion Society. Call Joey Selesny at (248) 593-6760 or visit ats.org/contact to learn more or make a donation to this initiative of two world-class institutions that are joining forces to unlock the potential of big data to transform children’s health. This article was produced by JTA’s native content team.