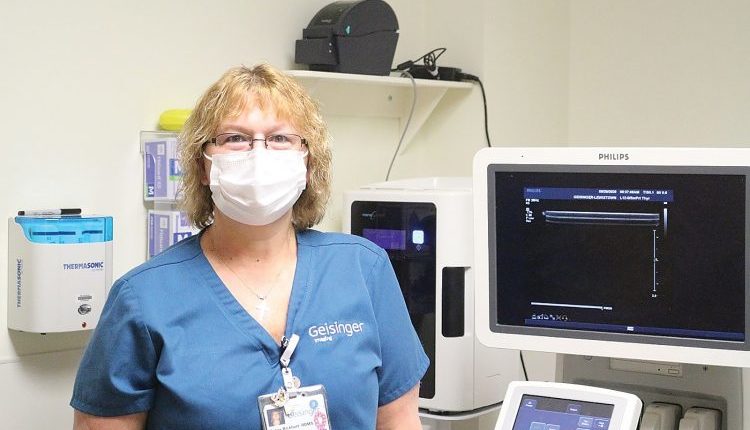 LEWISTOWN – Before she was diagnosed with breast cancer, Deb Bickhart had no symptoms or lumps and was feeling fine. “I was only 38 years old at the time. I had a 16-year-old, a 2 1/2-year-old and a 1-year-old,” explains the Geisinger-Lewistown Hospital diagnostic medical sonographer. “I breastfed all my children and had just stopped in January 2004 when I started my job.”

During Deb’s annual gynecological exam, Ramona Shope, CRNP, reviewed her family history. Seeing that Deb’s mother had died of breast cancer in 1999, she ordered a baseline mammogram for her.

When the first mammogram revealed abnormalities in Deb’s left breast, the radiologist recommended a diagnostic mammogram. “After that examination, they recommended a breast biopsy,” explains Deb. Deb’s primary care physician, Sharon Galvin, MD, showed her to David Arbutina, MD, a surgeon at the Geisinger Scenery Park Clinic at State College.

The biopsy showed cancer that was DCIS (ductal carcinoma in situ), the earliest form of breast cancer. Deb saw two oncologists, who asked for a second opinion after getting the first doctor’s recommendation. Her second oncologist was David Wolfe, MD, who was also based at the Scenery Park clinic.

“In November 2004, Dr. Arbutina performed my mastectomy,” Deb said. “Then Dr. Wolfe out of the chemo process. He said I was a candidate for a clinical trial and made me aware of all the risks and benefits. Knowing that my participation would help other women, I was willing to give the trial a shot.”

Deb’s chemotherapy treatments began in January 2005. “My chemo nurses were wonderful. Kathleen Depra was especially passionate about serving her patients. She was my rock during chemo!” she says. Deb received treatment every three weeks for three months. After those treatments, she began a second type of treatment for 12 weeks, along with a clinical trial medication.

But Deb’s treatment plan wasn’t over yet. She then began 33 radiation treatments under the care of a former Geisinger provider, Bernard Rogers, MD. In November 2006, Deb underwent a mastectomy and reconstruction surgery that included a trans-rectus abdominal muscle (or TRAM) flap. “TRAM flap uses your own fat and muscle to reconstruct the chest,” explains Deb. “Dr. Joseph Desantis was my reconstruction surgeon. He works in Scenery Park, but performed my surgery in Danville.”

Deb’s story doesn’t end there. She developed a seroma, a buildup of fluid that is common in breast surgery patients. “I drained the seroma every three weeks for a year,” she says. “Then Dr. Desantis performed another surgery to clean it and it eventually healed.”

“I’ve learned to be positive and trust God,” Deb said. “It was helpful to talk about my journey. And I’ve learned not to be afraid to ask for help and let others help if they offer it. I kept my family close. They were my main support system, especially my husband, Mike, sister-in-law, Beth and my daughter, Megan. I had a team of doctors and nurses to lean on when I needed to talk. They were fantastic – I’m so grateful to them all.”

Deb has been cancer free for 17 years and hopes to inspire others by sharing her story. “I want to help others who may be going through the same challenges I am,” she says.

Today’s latest news and more in your inbox

Why aren’t the nurses in our pediatrician’s office vaccinated?