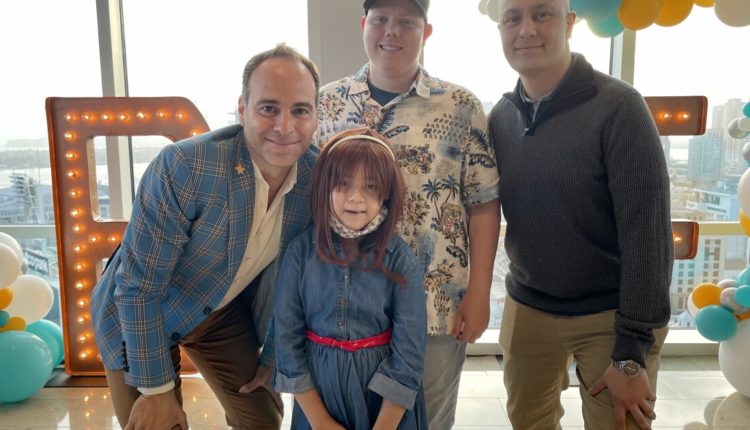 The Baller Dream Foundation, an uplifting nonprofit that supports children and young adults battling cancer, celebrates its three local “Ballers” at an event starting at 2 p.m. Sunday, Nov. 21. Held at the Monarch Ocean Pub, this is the second San Diego fundraiser for the uplifting organization.

“We had an incredible first event introducing San Diegans to The Baller Dream Foundation and the inspiring and special Ballers we met through Rady Children’s Hospital,” said Frank DeBlasi, the founder of The Baller Dream Foundation and a cancer survivor himself. “We are excited to be back in San Diego for our second event and to be able to honor these inspiring Ballers with the incredible gifts and experiences we have planned for them.”

California Ballers include nine-year-old Aritzve Aguirre Texcahua, 18-year-old Dustin Joiner and 22-year-old Ali Alipour. All three Ballers bravely fight various cancers. The trio also share a desire to enter the medical field as a career. Aguirre Texcahua, who likes snacking on Turbos, watching “Moana” and eating pizza, wants to become a nurse when he grows up. Joiner recently graduated from high school and wants to pursue a career as a nurse or firefighter. He enjoys watching football, especially his favorites Drew Brees (now retired) and the New Orleans Saints. Alipour is currently completing his pre-med program at UC San Diego with aspirations to become a radiation oncologist. He likes to eat pretzels and pizzas and watch his favorite show ‘House’.

Founded by DeBlasi, a testicular cancer survivor, The Baller Dream Foundation has supported its Ballers since 2007 when DeBlasi hosted the first small gathering for friends and concertgoers on the grounds of Saratoga State Park. That first gathering began with a stream of annual events that has grown tremendously over the years, with proceeds from the events benefiting a national cancer foundation. In 2013, DeBlasi shifted the foundation’s focus to supporting children and young adults affected by cancer. The recipients are called ‘Ballers’, a modern term that suggests that someone is doing well, feeling good and in control; and the Foundation’s Ballers are resilient, courageous, and deserving of recognition. Since its inception, the nonprofit has honored and celebrated countless children in New York, Alabama, Arizona, New Jersey, and Nevada, working closely with children’s hospitals to provide a variety of gifts, experiences, and activities.

A fun and inspiring event, the fundraiser in San Diego begins at 2:00 PM. Guests are treated to snacks and drinks by local businesses, with breathtaking panoramic ocean views from the rooftop terrace. Details, tickets and sponsorship are available on the website at ballerdream.org/sandiego.

Ask the Pediatrician: How can parents best support their children during the pandemic? | Lifestyles