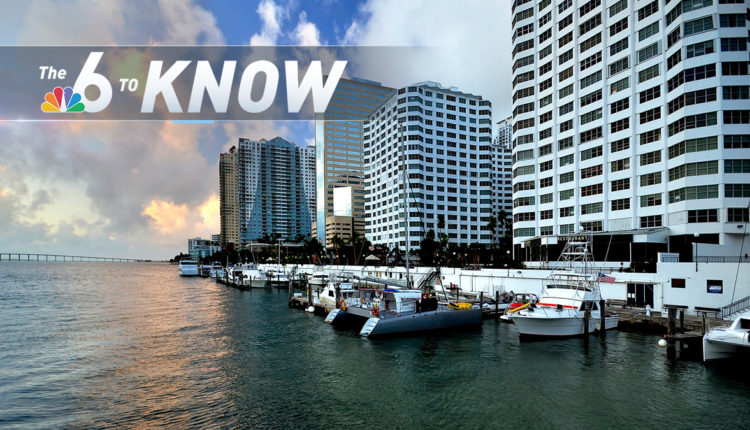 It’s Wednesday, October 13 – and NBC 6 has the top stories of the day.

No. 1 – Miami officials have decided to fire the city’s new police chief six months after his stormy term in office, after he was criticized by city commissioners he accused of meddling with the police station and investigating internal affairs.

Miami City Manager Art Noriega said in a statement Monday that he has suspended Chief Art Acevedo with the intention of terminating his employment. At a press conference Tuesday afternoon, Miami Mayor Francis Suarez said he agreed with Noriega’s decision. Suarez said Acevedo is entitled to a commissioner hearing and said he expects Acevedo to request the hearing, which is being scheduled. Acevedo was recruited by Suarez, who praised him as “America’s best chief” earlier this year. But Acevedo began to cause a stir almost immediately after his swearing-in in April, taking over internal affairs and making significant changes to his command staff.

No. 2 – A woman has come forward claiming to be the grandmother of a child who was abandoned near Mercy Hospital on Tuesday.

Miami police posted a photo of the child earlier in the afternoon and asked about her parents or relatives. They are currently in the process of confirming if that woman is really her grandmother. The police also want to get in touch with the woman who left the child behind. Earlier, an unknown woman entered a medical building and handed the young girl over to a man who happened to be an off-duty officer, Miami police said. The child appears to be about 2 years old and in good health. She is currently in custody of the Children and Family Affairs Department. Anyone with information is requested to call 305-603-6300.

No. 3 – The status quo remains in effect at Broward County Public Schools.

The school board voted by a 6-3 margin on Tuesday to appoint interim superintendent Dr. Vickie Cartwright not to give tenure. Board member Nora Rupert, impressed with Cartwright’s performance after two months on the job, had asked the board to give her the job outright. Cartwright was hired to replace Robert Runcie after he resigned, but the board promised the public that a permanent replacement would be searched across the country. So handing her over now would be like moving the goalposts mid-game, the majority of board members reasoned. Next week, the board will consider a motion to allow Cartwright to apply for the permanent position. When it passes, she said she definitely would.

No. 4 – Florida Governor Ron DeSantis gave an update on wife Casey DeSantis’ battle with breast cancer on Tuesday, saying he is confident in her battle.

“She’s a very, very strong woman and it’s not easy when this happens because it’s just, your life goes on and all of a sudden this is something that balances that,” DeSantis said at a news conference on Tuesday at St. Piet Beach. “She fights, she’s tough.” The governor announced earlier this month that his 41-year-old wife, the mother of the couple’s three young children, had been diagnosed with breast cancer. The couple are parents to 4-year-old daughter Madison, 3-year-old son Mason and 18-month-old daughter Mamie — the first baby to be born at the Governor’s Mansion in more than 50 years.

New. 5 – The Pfizer and BioNTech COVID-19 vaccine may be available soon for children ages 5 to 11, pending approval from the Biden administration.

In a statement, Pfizer said “hundreds of millions” of people aged 12 and older have already received the two-dose injection, arming the community against the spread of the virus. Pfizer added that increasing pediatric cases of COVID-19 are making the need to vaccinate children even greater. With a possible vaccine approval on the horizon, parents of school-age children are grappling with an important question: “Should I get my child vaccinated?” Click here to see a story from NBC 6’s “Moms With a Mic”, Julia and Marissa Bagg.

No. 6 – If we are to believe a new survey from Time Out Magazine, Brickell is the place to be, ranked among the coolest neighborhoods in the world – in fact, it’s the only Florida neighborhood on the list.

Miami’s financial hub, Brickell, is one of 49 neighborhoods selected by the magazine. It ranks third in the US roster, surpassed only by Chicago’s Andersonville and New York’s Chelsea neighborhoods. It’s a big upgrade for a place magazine readers found “overrated” in 2019 — but things like The Underline, the new outdoor park under the elevated train in Brickell, have made it a more attractive place to live. Click here to learn more about why in a report from NBC 6’s Cristian Benavides.