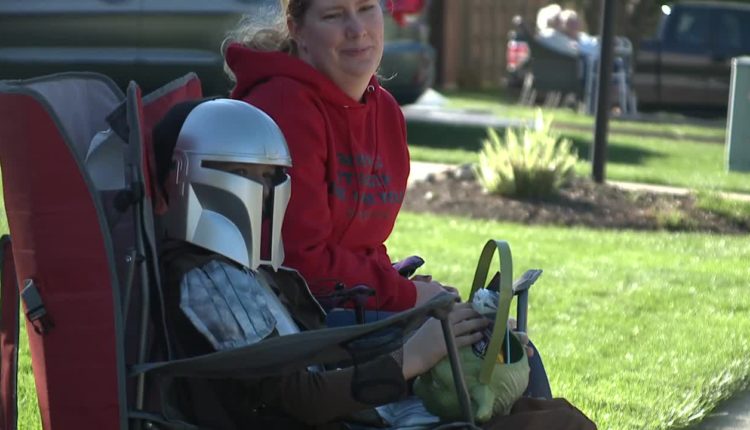 Since Noah will be hospitalized for chemotherapy treatments over the Halloween holiday, dozens of people have decorated their cars and dressed up in costumes for a drive-by trick-or-treat parade.

“I want to let him know that I hope he’s feeling better and that he’s great,” said Luke Jones, one of Noah’s classmates and friends.

Surrarrer Elementary School PTA hosted the event and also created a #NoahBeStrong committee to help the third grader and his family.

The Strongsville Police Department led the parade through Noah’s neighborhood, and each vehicle dropped off candies, treats, and toys.

“LIt was pretty fun and pretty insane at the same time about how much stuff we got,” Noah said, “I appreciate everyone coming too.”

In mid-August Noah was diagnosed with a very rare form of bone cancer called osteosarcoma.

His parents say he showed few symptoms, but they knew something wasn’t right when he started to move more slowly and started hurting while running.

Then they noticed something on his left leg that looked like an insect bite.

“Like a little lump that caught the light a little bit and I noticed it,” said Rob, Noah’s father.

Doctors at the University Rainbow Babies and Children’s Hospital performed multiple tests and made the rare diagnosis within a few days.

“Very unexpected, kind of an overnight diagnosis,” said Susan, Noah’s mother. “Noah has been a trooper through all of his diagnostic tests and treatments.”

Black Friday 2021 Deals Rolling Out Earlier Than Ever: List

In addition to chemotherapy, Noah also faces some difficult surgeries.

“So they’re going to remove some of his femur and replace it with a rod,” Rob said.

To help with rising medical costs, loved ones have created a GoFundMe and special T-shirts.

The tees have the text “May the Strength Be with You” printed on the front and were designed by Noah and his family.

“I just love Star Wars, so I might as well put a Star Wars pun in it,” Noah said.

The whole family is optimistic about the future and is grateful to everyone in the community, from close friends to strangers, for all the love and support, especially the incredibly sweet Trick-or-Treat parade.

“Yeahwe want to thank everyone. We appreciate it so much,” said Rob and Noah with a beaming smile.

Child Covid Cases Up, According to American Academy of Pediatrics – CBS Detroit

History, significance and tips to keep your kids’ bones healthy