Trips to Children’s Mercy turn into a police investigations 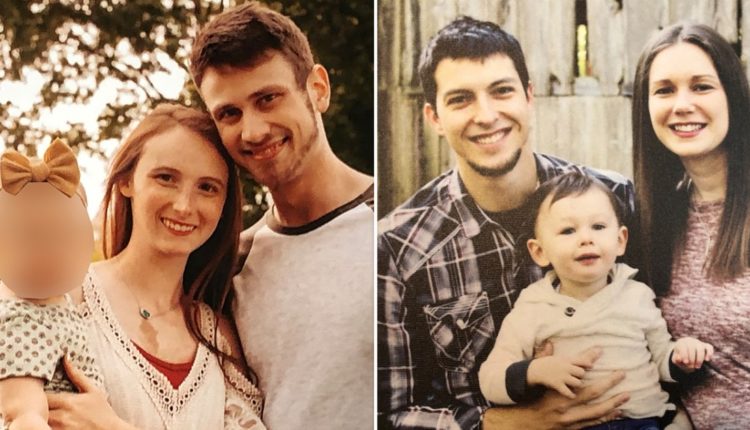 Kansas City, Mo. – Cayleigh Egelston was worried her baby might have cancer when she took her to the doctor in the summer of 2020.

It all started with a bruise.

“When I went to change her, I saw a bruise on her back,” Cayleigh said. “I panicked.”

The Egelstons had good reason to be concerned. Cayleigh’s husband, Chase, has a family history of leukemia. Unexplained bruises are often the first sign.

According to Cayleigh, the doctor agreed that the bruise didn’t look normal. But Ceylan’s labs clearly came back.

After initial relief, Ceylan was referred to a hematologist at Children’s Mercy for further investigation.

But before they made it to the appointment, an investigation began into how Ceylan got the bruise.

“It was like my worst nightmare was starting to come true,” Cayleigh said. “I got a call from the Jackson County Children’s Department.”

Cayleigh was asked to take Ceylan to the Children’s Mercy emergency room to visit the hospital’s scanning clinic, which evaluates children for signs of abuse.

It is not clear who called the first hotline.

“I walk into this ER feeling like a criminal,” Cayleigh said.

Ceylan underwent a series of tests, including a full-body X-ray.

“I was told I couldn’t be alone in the room with her,” Cayleigh said. “I had to watch them tie my five-month-old to a table and I couldn’t comfort her.”

Ceylan’s tests came back to normal.

“There was nothing but that bruise that would indicate she was being abused,” Cayleigh said.

However, hospital records show that staff at Ceylan have been diagnosed with “child physical abuse.”

Records show that the Egelstons were allowed to take Ceylan home with them on the terms that a relative would accompany them with Ceylan.

A social worker had to visit the house every week. The Egelstons were also required to attend parenting classes and family court hearings.

The Egelstons are listed as assault suspects in a police report.

dr. Lisa Schroeder, Children’s Mercy medical director, said the law is broad and staff must report even the slightest suspicion of abuse.

“Imagine the devastation if we didn’t report it and someone you didn’t even know injured your child and we missed those early signs and the child comes back with a worse injury or something more devastating,” Schroeder said.

Four months after Ceylan was diagnosed with child abuse, while still working through the child welfare system, Cayleigh noticed a popping sound coming from Ceylan’s hip.

The Egelstons took Ceylan to see a doctor at Children’s Mercy who diagnosed Ceylan’s hip dysplasia.

“That caused the bruising on the lower back, rather than the physical abuse stamped on their medical records,” Gilmore said.

The Egelstons had to go back to family court for another hearing when they got the call from Gilmore.

“We got a call from her that the case was dropped and that we were done, that we didn’t have to go to court and that everything was just over,” Cayleigh said.

A year later, the Egelstons are still dealing with the trauma of the initial diagnosis.

Another family, another suspicious bruise

In March, Katie and Kyle Basch took their son Wyatt to Children’s Mercy in Northland.

“I felt like those doctors and nurses had us there on trial,” Katie said.

Wyatt vomited and had a fever.

During the examination, staff noticed small bruises on one side of Wyatt’s back that looked like fingerprints.

“They were smaller than my little finger,” Katie said.

Wyatt’s father, Kyle, said he threw Wyatt up and down in the air that week while playing. Katie said that both she and Wyatt bruised easily. The Basches said it was the only explanation they could come up with for the bruises.

Wyatt underwent an X-ray, which revealed a rib fracture, according to the Children’s Mercy radiologist.

Wyatt was taken by ambulance to the Children’s Mercy center for further examination.

“They took a full skeleton and said they confirmed the fracture at that point,” Kyle said.

A change in behavior

The diagnosed fracture was on the other side of the bruise. The Basches said Wyatt went to gym that week and never complained of pain, which was confusing to them.

Both Katie and Kyle said they wanted to know why no one would show them the X-ray films.

“That’s what’s so frustrating about it, they see something we don’t, so please point it out and show us what you see,” Katie said.

Katie said she was beginning to doubt the diagnosis. She also began to doubt herself.

“I was devastated,” Katie said. “If this was really the truth, how did I, a stay at home mom, miss that?”

Despite the diagnosis, the Basches said a social worker at the hospital assured them they would be going home soon.

“She made it sound like, check out all your answers, this is great,” Kyle said.

But that all changed during the shift change, the Basches said.

Kyle and Katie said the new social worker wouldn’t tell them much about their case.

The Basches said they got most of the information from a state social worker who spoke to them over the phone.

“She was basically the one to let us know about everything. It was never Children’s that really let us know what was going on,” Kyle said.

Katie said she remembers a conversation with the state social worker that scared her.

“She said, ‘Well, they want to take him out of your care, they want you to recreate these injuries,” Katie said. “That was the worst moment of my life. I’ve never cried so hard and I’ve never been so afraid of losing my child.”

Like the Egelstons, the Basches are also listed as suspects in a police report. Katie remembers the moment she was told the police had been called.

“I’ve really lost it,” Katie said. “I actually fell to my knees crying.”

Katie said she started pleading with the state social worker.

“I cried to her on the phone. I said, ‘I know you hear this all the time, but I didn’t do this. I love my kid. My husband loves our kid. We didn’t break his rib’ said Katie. .

The Basches were allowed to take Wyatt home on the condition that a state social worker visit the house the next day.

“She immediately looked at him and she laughed that the bruises were called significant,” Kyle said. “She says, ‘My 4-year-old has twice as many bruises now, so I’m not sure what they’re looking at.'”

State records show that the social worker conducted interviews with people who knew Wyatt, including his gymnastics coach who confirmed that Wyatt attended gymnastics that week and showed no signs of pain.

The state dismissed the cases, noting that the bruises on Wyatt were “minimal and consistent with the history provided by the family.”

The state found insufficient evidence of abuse and closed the case.

What about the observed break?

The Basches said they were still concerned about the diagnosed breakup. Kyle, a chiropractor, took another X-ray of Wyatt. He saw nothing.

Katie and Kyle also took Wyatt to Diagnostic Imaging for a fourth X-ray. The radiologist’s report notes that a fracture is not indicated.

The Basch and Egelston families both said they understand that hospital staff have a duty to protect children from child abuse.

Katie said the experience made her fear the medical system. She also said she doubted herself as a mother.

“I’m in therapy for it,” Katie said. “I’ve lost all confidence as a mother because of this.”

Cayleigh Egelston said she is also in therapy because of their experience.

“I feel like I have PTSD from it,” Cayleigh said. “I don’t feel like I can be a normal mom letting my kid play because I’m scared of every bruise I get.”

But both families said it was going too far. For the Egelstons, they said more should have been done to rule out medical problems with their daughter before she was diagnosed with abuse.

“I want it to be more than, ‘I see a bruise on a child, it’s being abused,” Cayleigh said. “It’s not always this dry. Our child had a bruise and she was not abused. We didn’t abuse her.”

For the Basches, they said they felt judged by the staff.

“There is no innocent until proven guilty,” Katie said. “There’s, ‘Oh, we have an X-ray of a possible broken rib and you’re guilty of doing it. There was no other explanation.'”

It’s a feeling the Egelstons can identify with as well.

“Guilty until proven otherwise, that’s exactly what happened to us,” said Chase Egelston.

The I-Team told Schroeder about the concerns of the families.

“That makes me sad,” said Schroeder. “We don’t condemn them and we don’t blame them. That’s not our role.”

According to Schroeder, it is not the job of staff to accuse parents or determine that abuse has occurred.

She admits that, as with any diagnosis, medical professionals don’t always do a good job of detecting child abuse.

“It’s not exact,” Schroeder said. “That’s why the mandate is so broad.”

Schroeder said she knows the process is difficult and understands that innocent families will sometimes be investigated.

“That’s actually one of the things that keeps me up at night,” Schroeder said.

“We know we have a police report that says we’re suspects in all of this,” Kyle said. “[Wyatt’s] file will be flagged as an abusive file and something to watch out for. We want it corrected and we don’t want other parents to suffer as well.”

When originally diagnosed with a broken rib, Children’s Mercy turned down the Basches’ request.

The Egelstons want parents to be aware that this side of the child welfare system exists.

“This is real,” Cayleigh said. “We didn’t think it could happen to us and it did.”