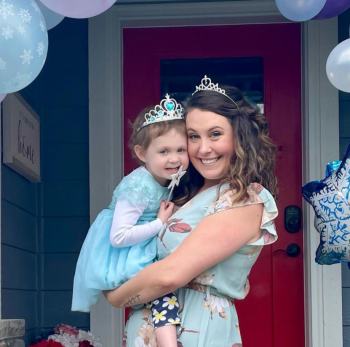 There may be no better way for a 3-year-old to celebrate cancer remission than with a Frozen-themed birthday party. That’s exactly what Penny Hatch and her family did last weekend.

There may be no better way for a 3-year-old to celebrate cancer remission than with a Frozen-themed birthday party. That’s exactly what Penny Hatch and her family did last weekend.

Penny was diagnosed with neuroblastoma, a solid tumor cancer with a survival rate of about 50%, three months after her little brother, William, was born with a life-threatening heart condition. Today William is thriving at home and Penny is in remission.

Penny’s last immunotherapy treatment was on Sept. 2 after a year of treatments including surgery, chemotherapy, a bone marrow transplant, radiation and immunotherapy that boosts the immune system to fight disease.

Samantha, Penny’s mother, was overcome with emotion when she injected the last dose of immunotherapy into her daughter’s mouth. “It felt like I could finally feel the weight of everything we’ve been through.”

Although Penny’s cancer treatment has been completed, she will still come to Seattle Children’s to deal with the effects of her cancer and its treatment, including damage to her feet.

Penny’s cancer was first discovered when her parents, Samantha and Kyle, noticed she was acting strangely. They later learned she had a tumor at the base of her spinal cord that was causing nerve damage in her feet. The tumor swelled after her first biopsy, causing a condition called cavernous foot — in which the arch of the foot is much higher than normal.

Penny will have surgery in October to lengthen her tendons and flatten her feet so she can get orthotics so she can walk on her own.

September is also an important milestone for William, who was born with hypoplastic left heart syndrome, a serious congenital heart defect in which the left side of the heart is underdeveloped. After spending his first four months of life at Children’s, William finally went home a year ago this month.

William (left) and his twin brother, Theodore, are now 17 months old. William has been home with his family for the past year and is currently stable.

Today, William is keeping up with his twin brother Theodore and achieving the same developmental milestones. Samantha and Kyle still keep a close eye on William’s blood pressure and know that he will need a third heart surgery around age 3.

“We’re trying to stay present and not think too far into the future,” Samantha said. “We know Penny will have side effects from her treatment and William will need a heart transplant at some point, but for now we’re just enjoying having all our kids at home together.”

Looking ahead, when asked what Samantha would like Penny and William to know about this immensely challenging time in their lives, she said, “How much were they loved, not only by their families, but also by hospital staff and total strangers who told our story? “So many people have been inspired by the strength of our children. Through their struggle, Penny and William have made the world a better place. What once felt like a nightmare from which I could not wake is now the legend of my wonderful hero children.”

Pediatricians feeling overwhelmed as the demand for COVID tests grows