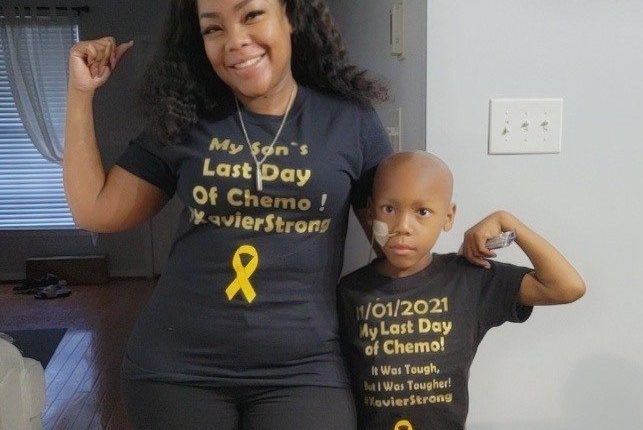 PORTSMOUTH, Va. (WAVY) – In January, 7-year-old Xavier Noris was diagnosed with COVID-19 after complaining of stomach pain. He recovered and resumed his active life of sports and the usual “did, didn’t” banter with his older brother, Devyn.

Weeks later, the virus was not the most immediate medical concern. After blood was spotted in his urine, doctors from Children’s Hospital of The King’s Daughters diagnosed Xavier with a stage three Wilms’ tumor.

The Wilms tumor, or nephroblastoma, is a cancer of the kidneys that usually occurs in children. It is named after the German pathologist and surgeon Dr. Max Wilms who first observed the tumor in 1899.

In the family’s first Zoom interview with 10 On Your Side in March, Xavier, a Princess Anne primary school student, was too weak to participate in the interview. He sat on his mother’s lap, Nikysha Noris, and leaned his head against her face for support.

After 10 grueling months of chemotherapy, radiation and surgery, doctors at CHKD delivered the last dose in its last scheduled round of chemotherapy on Nov. 1.

To celebrate the milestone, the Noris family wore custom T-shirts documenting the event.

In a Zoom interview 10 days after the last chemotherapy session, Xavier was sitting on his mother’s lap, but he made funny faces for the camera and eagerly joined the interview.

Regina Mobley: “Xavier and mama, tell me about that day [of the last round of chemo].”

xavier: “It felt good, because I didn’t like chemo very much. I am very happy that it is my last day.”

Nikysha Noris: “I was a ball of emotions from the moment we got up. I knew what the day meant. We put on the shirts. We made such a big statement because it feels like such a long journey and chemo is no joke. It takes him days to recover, so the thought that this was his last chemo was not too crazy. I was just super proud of him.”

Earlier this year, the Princess Anne Primary School Family organized a parade in honor of Xavier, who was studying remotely. Today, Xavier is healthy enough for personal classes.

More scans will follow after Thanksgiving, but for now the family is celebrating a medical milestone.

Panther Creek pediatric office notifies parents, patients it will not accept unvaccinated; says not due to new COVID-19 measures