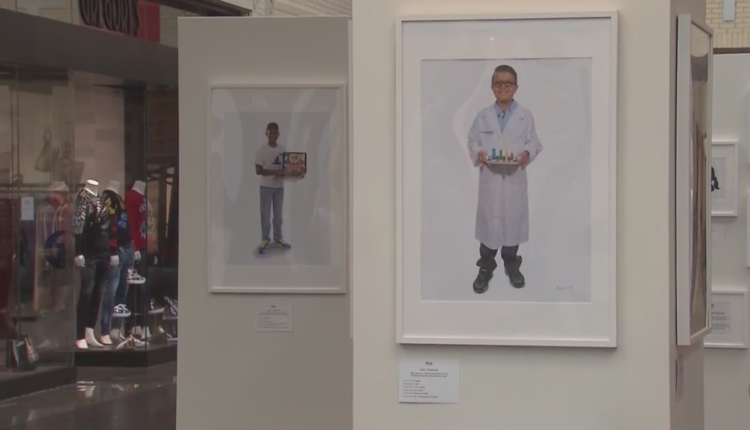 DALLAS (CBSDFW.COM) – Jaxon Starling was a high school sprinter, until the doctor called the day after Christmas 2019.

“We were dealing with this pain in his leg, which was getting worse and worse,” explains his mother, Shay Roberts. ‘And then find out it’s cancer? It’s like being a parent’s worst nightmare.”

The Frisco teen had been diagnosed with stage four osteosarcoma — a bone cancer that had already started to spread.

“It was a little rough,” admits Jaxon in a soft voice — a combination of typical teenage shyness and the chemotherapy. “Do not feel so good.”

When the family stopped reeling long enough to realize the nightmare was real, Wipe Out Kids Cancer was there.

The nonprofit provides resources for families, fundraising for research, and currently a unique photo exhibit at North Park Center aims to raise awareness.

“You have these kids who are sick…but they also have a future and they have goals,” said Aashik Khakoo, CEO of Wipe Out Kids’ Cancer. “It’s all about ‘what do I want to do later’? How can we help them grow up?”

Cindy Brinker Simmons is the founder of WOKC and co-chairs the exhibition along with volunteer Karee Sampson.

Photographer Marc Robins donated his artistry to provide the portraits.

And they all know that the impact goes beyond the photos.

“It really cheered him up,” Roberts says of her son Jaxon. “I watch and in awe and he’s smiling and has the biggest grin on his face. It’s really uplifting for them. I just think it really gives them the courage to keep going.”

Khakoo says he considers all of the children in the exhibit “his children” and encourages North Texans to get involved.

Jaxon was thrilled to be included in the exhibit and says he wants to “become a graphic designer and actor.”

And his mother had this to say about the cancer that threatens to stand in his way.

“Stage four cancer. I know there is a God and I know he is a miracle worker,” explains Roberts. “I’ve seen him do it and my faith is strong enough to believe he can do it for Jaxon.”

So while they wait for their miracle, she encourages shoppers in North Park to take a moment. And enjoy the power of tomorrow’s dreams.

“It will make you cry,” she warns, “if you have any feelings for children…it will bring you to tears.”

The “When I Grow Up” warrior portraits will be on display until Sunday on the lower level of NorthPark Center between Neiman Marcus and Nordstrom’s.

‘I missed my patients’: Pediatric nurse back at work after lengthy Covid-19 coma – WOAI