What Would Be the Best Treatment Option? 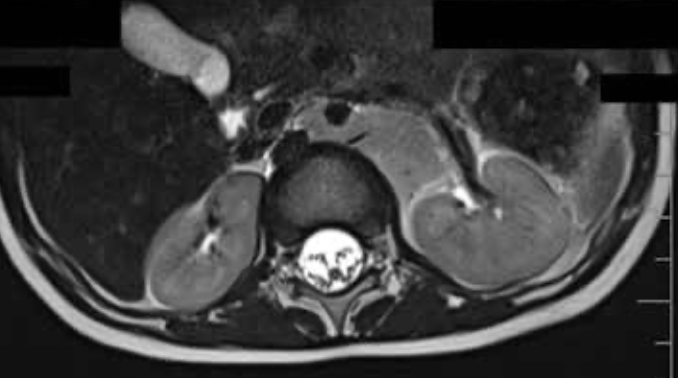 In this clinical dilemma, researchers determine how best to treat patients with opsoclonus-myoclonus-associated neuroblastoma with bone marrow metastases.

A 1.9-year-old girl was taken to hospital with dancing eye movements, ataxia and behavioral disturbances. The MRI showed a retroperitoneal tumor (transverse size: 3.9 x 2.5 cm, craniocaudal size: 4.6 cm) extending from T12 to L3 vertebral bodies (figure), which was suspected of neuroblastoma. A biopsy of the lesion and bone marrow was then performed. The initial pathological evaluation (CD56+, PHOX2B+, NKX2-, Ki67 50%-55%, NSE+, CD99-) of the tumor and bone marrow confirmed the diagnosis of poorly differentiated high-risk neuroblastoma.

What would be the best choice for further treatment of this patient?

Dancing eye syndrome, or opsoclonus-myoclonus syndrome (OMS), is a rare condition that affects the nervous system. OMS is characterized by rapid, multidirectional eye movements (opsoclonus), rapid, involuntary muscle twitches, sleep disturbances, cognitive dysfunction, and behavioral changes.1 OMS usually occurs in association with tumors, most commonly neuroblastoma (NB). About half of pediatric OMS is related to NB. The incidence of OMS is rare; one of the prospective studies in the UK estimated 0.18 cases per million per year

The literature states that OMS is caused by an autoimmune process and early immunosuppressive treatment is recommended.3 In addition to corticosteroids, intravenous immunoglobulin (IVIG), cyclophosphamide or rituximab can also be used. However, there is no standard combination or duration of immunomodulatory therapy

A previous study showed that the typical features of neuroblastoma differ between OMS children. Notably, the frequency of OMS associated with NB is lowest in children 6 months of age or younger

NB is the most common extracranial solid tumor in childhood. It can be divided into several prognostic groups based on age, histological subtype, tumor grade, stage, MYCN oncogene status, chromosome 11q status, and DNA ploidy. In addition, according to the revised classification, segmental chromosome aberrations (loss or gain of part of a chromosome arm) also play a role in the classification system and are associated with an unfavorable prognosis. Accurate staging plays a critical role in treatment planning as it is provided according to assigned risk groups

There is a wide range of treatment methods for patients with NB: observation, chemotherapy, myeloablative consolidation therapy (single or tandem), surgery, radiation therapy, immunotherapy. Surgical resection of the tumor is an essential part of the treatment of NB, but in some cases induction chemotherapy is required to predispose the tumor to surgical resection.8 Hence, initial surgical resection with negative margins and without loss of neurological function is not always possible. possible. Performing surgery on patients with disseminated disease does not guarantee total resection of the primary tumor. In addition, in the case of a surgical procedure beforehand, because the radiation volume is adjusted during the resection, the radiation field is much larger. Nevertheless, some recent studies suggest better treatment outcomes for complete resection. Surgery alone is a preferred option for most patients with low-risk disease. However, based on several studies, resection should be performed after several courses of induction chemotherapy when the tumor becomes smaller and less invasive. Therefore, initial surgical treatment would lead to a number of complications and would not improve the survival of this patient, leading to answer B (surgical resection of the primary tumor) a poor choice

Despite the fact that OMS is associated with better outcome and low-risk disease, in this particular case the patient had metastatic disease and an unfavorable histological type according to the Shimada classification. Patients over 18 months of age and patients with disease spread or localized disease with unfavorable markers, such as MYCN amplification, are most at risk for disease progression and mortality. Therefore, answer C (observation) is not the preferred path of treatment for this patient, as observation alone would lead to disease progression

The standard approach for high-risk neuroblastoma includes initial chemotherapy with further surgical treatment and aHSCT. These patients typically present with inoperable diseases.12 Thus, it is critical to provide induction chemotherapy to reduce tumor burden and continue local control. To reduce disease recurrence and reduce nervous system symptoms, children with OMS NB should be treated with the combined modality therapy, including surgery, chemotherapy, aHSCT, and/or radiotherapy. Current treatment approaches for OMS include immunomodulatory therapies, including steroids, IVIG, cyclophosphamide, and more recently rituximab.13 Given this information, Answer: A (chemotherapy with further treatment including surgery and aHSCT) is the best treatment option for this patient.

The child received 6 cycles of chemotherapy according to the NB2004 protocol, after which complete surgical resection of the tumor was possible. After the first cycle of chemotherapy, the symptoms of OMS had disappeared; therefore no steroids or immunoglobulins were added to the treatment. Pathological examination of excised tumor showed histological differentiation (ganglioneuroma-, CD56+, NSE+, Ki67 1%-2%). Thereafter, aHSCT was performed. Now the child is disease free and has no neurological abnormalities due to OMS. N

Cancer in children with paraneoplastic OMS appears to have a better prognosis compared to cancer patients without paraneoplastic symptoms. OMS is believed to be caused by an autoimmune process, and early immunosuppressive treatment is recommended. The prognosis of high-risk NB is significantly better with high-dose chemotherapy and/or radiotherapy followed by autologous bone marrow transplantation than chemotherapy alone.

CONFLICT OF INTEREST: All authors have disclosed no conflict of interest.