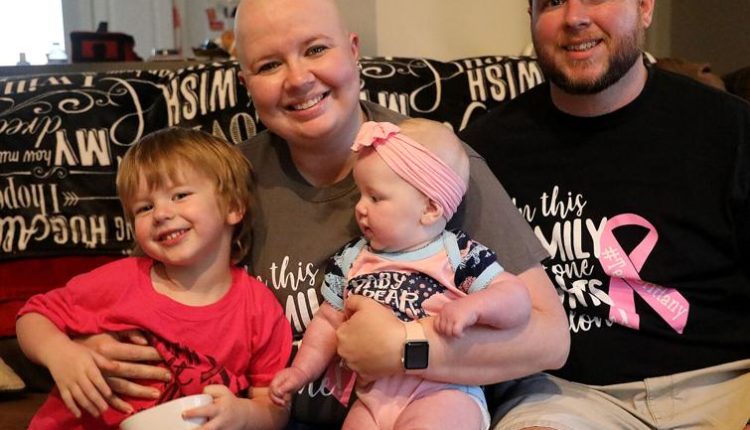 A 30-year-old registered nurse with two children under the age of 4 is not who many would imagine as a typical stage 4 breast cancer patient.

Age is one of many factors linked to an increased risk of breast cancer, and only about 4% of those diagnosed are under the age of 40, according to data from Susan G. Komen.

But for Pearl River’s Brittany Mistrot, this isn’t just a statistic — this is her journey. The young mother, who has spent the past four years as a nurse at Slidell Memorial Hospital, has become the patient.

Mistrot was 33 weeks pregnant with her second child when she discovered a strange lump in her breast. Doctors explained it away as a clogged milk duct, a problem common among mothers whose milk may come early for breastfeeding during pregnancy.

But a series of events—a fall in the bath, breast engorgement after she gave birth, and continued mass growth—proved that this was no ordinary maternity accident. It was the beginning of a struggle the young mother never expected.

It was breast cancer.

“It was like a punch in my stomach,” Mistrot said.

Doctors thought the cancer was stage 1 or 2 and she started chemotherapy treatments right away. But in August, results of a PET scan showed the cancer was “incurable” stage 4 and had spread to her liver, lungs and bones.

By September, it had spread to her brain.

Mistrot may be among a minority of women facing this struggle at such a young age, but the breast cancer issue is ever-present in Louisiana and the St. Tammany Parish community, and no age is exempt.

Breast cancer incidents in Louisiana are on the rise, said Heather Johnson, director of early detection and education at the Mary Bird Perkins Cancer Center. This year alone, some 4,000 breast cancer cases and 670 deaths are expected to occur in the state, she said. Mary Bird Perkins Cancer Center hosts free breast cancer screenings year-round, she said, and about 11% of women who needed additional testing were under the age of 40.

“While incidence rates for women in general are similar to recent years, those under 50 are rising in both Louisiana and St. Tammany Parish,” she added.

Early screening is vital, she said, and is “key to catching cancer at a stage where it is most treatable.”

Many women have postponed screenings because of COVID-19, she said, a problem that has been going on since the start of the pandemic. However, that delay could be “fatal to community members, as cancers can go undiagnosed or untreated,” Johnson said.

A weekly guide to the biggest news in St. Tammany. Register today.

Meanwhile, Mistrot’s family rearranges as the unforeseen hurdles of cancer have turned their lives upside down. She has a 5-month-old daughter, Bristol, and a 3-year-old son, Beau. Her husband, Brendon Mistrot, 33, has been her “rock,” she said. Brittany Mistrot has continued to work at Slidell Memorial Hospital doing administrative work, as working as a floor nurse is too risky due to COVID-19, she said.

“It’s never been, ‘Why me?’ It’s, ‘Why my family?'” she said. “Why do they deserve this to be part of their story? I refuse to believe this is it and God gave me these children to take me away so early .”

Her mission is to focus on the glass that is half full. It’s all about seeking blessings and focusing on her goal of getting the cancer into remission. She has coped well with chemo and radiation, she said, with no symptoms.

She has lost all her hair to chemo treatments, which makes her joke that she “matches” her husband.

“As a nurse, I knew it was coming. I knew it was inevitable,” she said cheerfully. “My husband is bald, so that makes it less of a blow. … He always gives me tips on caring for the bald head. It’s our joke: we match now.”

Brittany Mistrot has focused on embracing her large network of family and friends who have gathered around her. The Pearl River community even hosted a benefit event in September to raise money for her treatments, and a firefighter friend bears her name on his pink badge. Both the Slidell Police and Fire Department wear pink breast cancer month badges, along with the pink police cruiser. Anyone can sign the pink car for a minimum donation of $5 and the proceeds will go to the Slidell Memorial Cancer Center.

“Once everyone got through the shock of what we were told, everyone got together, both sides of the family are doing everything they can to help us,” said Brendon Mistrot. “It really brought everyone closer.”

The pair echoed each other’s feelings that the situation is “pathetic,” but they try not to focus too much on the future and instead embrace the present. The family enjoys camping and has trips planned throughout the year, some relocating just in case. Brittany has doubled the classes for her graduate degree and family time has become precious. Their children “have no idea,” Brendon Mistrot said, because they are so young, but the cloud of uncertainty continues to weigh heavily.

“We cannot look 82 years into the future and say we will grow old together. Now it’s, “How much time can we have together?” It changed everything,” Brendon Mistrot said.

“We try to see as much as possible and do as much together as possible.”

However, for Brittany Mistrot, she is not a quitter and this is not where her story ends.

“My hope is that my story can help and empower other people. When I was being treated at the cancer center, there were so many people, women and men, young and old, and no one gave up. That’s important in everyone’s cancer journey: don’t give up,” says Brittany Mistrot. “I hope my strength and my story can help other people on their journey. To see a light at the end of the tunnel, no matter how dark and grim it is.”

And for those who might be going through a similar struggle, she had this advice: Always fight for yourself.

“That lump was there six months before it was diagnosed as breast cancer, and it cleared up like a blocked milk duct, and I didn’t fight for extra tests,” she said. “Always fight for yourself. If you feel like the process isn’t moving fast enough, fight some more.”