Youth baseball dedicates one of its leagues to boy battling cancer 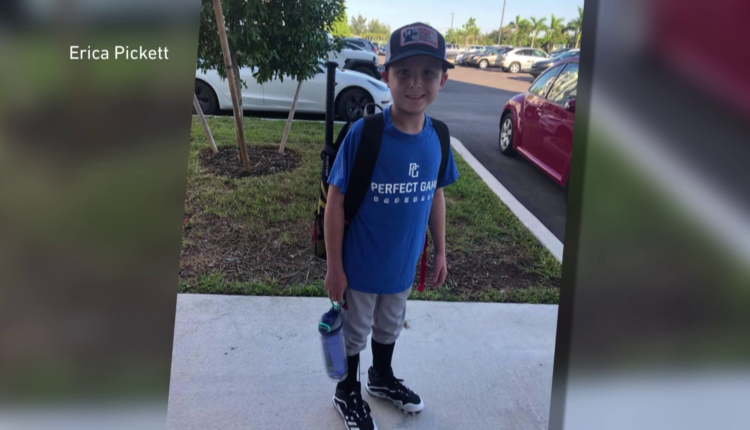 A young boy who has been battling cancer since he was four has missed many opportunities to practice the sport he loves. Now Cape Coral Cal Ripken Youth Baseball dedicates one of its leagues to him.

Tuesday would be Aydn Pickett’s return to the baseball diamond. He was all set to play again, but the doctors had other plans. So even though he won’t be on the field this year, he will still be a part of this baseball season.

While 9-year-old Aydn Pickett’s name will not be on any roster, he will be mentioned whenever anyone sets foot on this pitch this season to play that bears his name.

James Pickett is Aydn’s father. “For him, it means he’s still part of the team, even if he can’t play now,” James said.

Ayden has missed the game he loves because he has been battling leukemia for the past five years. He has relapsed seven times, has undergone chemotherapy and has been through it all.

“He’s been through a lot of things. Two transplants multiple procedures travel to Philadelphia and back and other areas. But the last three months have been the hardest,” James said. This is because Aydn’s doctors discovered that he had relapsed for the eighth time.

This most recent setback has held back Aydn’s return to baseball. “He’s disappointed that he can’t play on the pitch, but you know we’re doing our best with what we’ve got,” said James.

Now they support the team that supports their family. And that team includes more than 50 other families affected by cancer. Chris Risola is the Deputy District Commissioner of the Cal Pripkne Youth Baseball League. “Hopefully we can make sure he’s a kid for a while and he can fight again tomorrow, but let’s let him be a kid for as long as possible.

As part of the dedication ceremony, players from the Minnesota Twins Organization played a friendly game with the kids. Aydn finally got a chance to get back into the batter’s box.

He also ran the bases with a little help from his father. “To see him here today, just enjoy life, smile, laugh, that’s what we live for. For days like these,” James said.

Aydn says today was not the best day for Aydn. His legs hurt and he was a bit down because he can’t play this season. But, James says, as soon as Aydn saw that everyone was there to support him, he knew it would be a better day for his son. And it was because Aydn smiled and laughed.