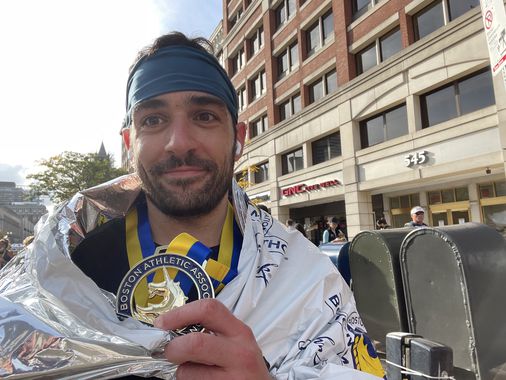 CNN reporter Andrew Kaczynski is running the Boston Marathon again in honor of his late daughter and raising money for other children battling brain cancer.

At 11:22 a.m. Monday, Kaczynski wrote on Twitter: “And we’re off! I dedicate each mile of the Boston Marathon to a different little fighter. Thank you to everyone who helped us raise $500,000. There is still time to donate at http://TeamBeansMarathon.com.”

Kaczynski’s daughter Francesca, whom he calls “Beans,” was just six months old when she was diagnosed with brain cancer in September 2020, according to his fundraising website Team Beans.

“Francesca was a healthy and sturdy girl who liked to take a nap on her father during long walks in her carrier,” the website reads. “She loved watching Sesame Street videos and smiling at me. She was an outgoing, daring and curious baby whose big, deep brown eyes liked to follow what I was doing. She loved to eat and be held close to her.” .”

Within a week of his daughter’s diagnosis, Kaczynski moved to Boston so she could receive treatment at Boston Children’s Hospital.

“Hospital staff would gasp with joy at her incredible, infectious smile,” the website reads. “They treated us like family and became our family in the midst of the pandemic.”

Since then, “we’ve never been the same and never will be,” the website reads. “The kindness of the people of Boston – the struggling restaurant in Fenway Park who gave us a free meal when they learned our daughter had cancer, the nurses who stood by our side while Francesca died. We will never, ever forget the good people who were there for us in our darkest moments.”

In 2021, Kaczynski ran the Boston Marathon while raising money for the Dana-Farber Cancer Institute’s Infant Brain Tumor Program. He also dedicated each of the 26 miles to a child who is fighting or has battled cancer, which he is doing again this year.

And we have left! I dedicate each mile of the Boston Marathon to a different little fighter.