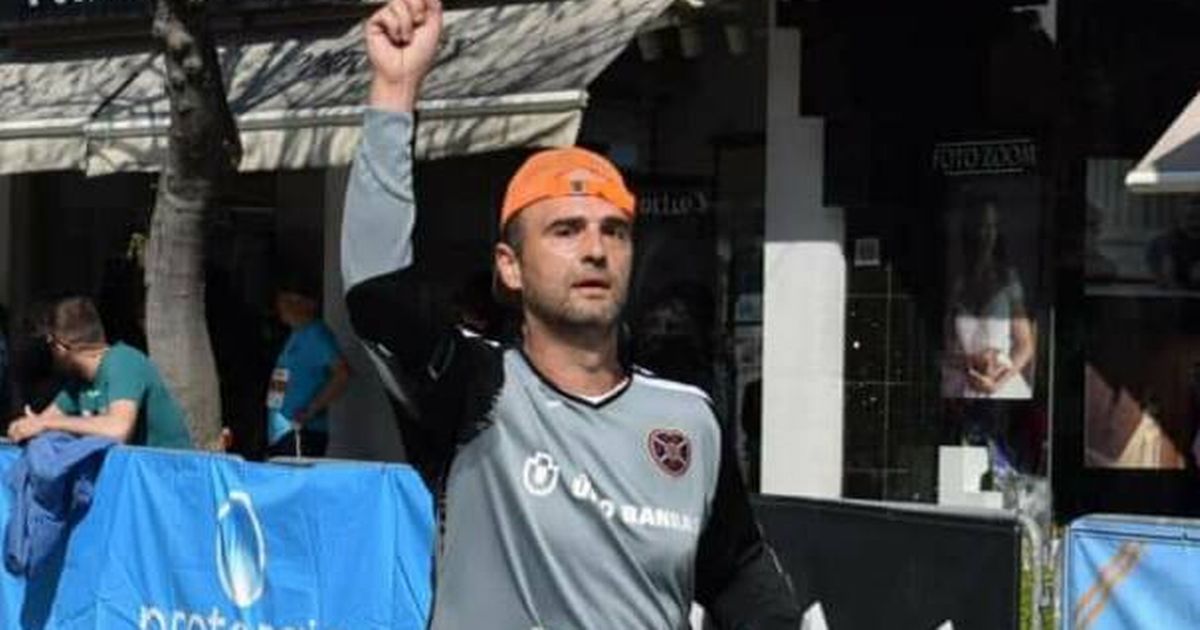 An Edinburgh Hearts fan who lost his mother to cancer dedicates his 51st half marathon to a young father who sadly passed away this week.

Nikos Sfakianos, 43, fell in love with the Gorgie team more than 20 years ago when he lived in Stirling in 1998 while studying at university there.

When he graduated, the Greek national moved back home but still followed the Jambos.

Tragically, his mother was diagnosed with stage 4 cancer in 2016 and to cope with the terrible news, the father of two started running for charity.

Since then, he has completed 50 half marathons, full marathons and 10ks in the memory of his late mother.

The Hearts fan was devastated to learn about Euan Smith, the 24-year-old father of two who died this week and decided to dedicate his 51st race in Edinburgh to fellow Jambo.

The avid runner always runs in Hearts attire and will wear a special heart shirt for this race and give this afterword to Euan’s family.

Niko will also be in Edinburgh for the half marathon. There is a fundraising page to raise money for childhood cancer charities that you can donate to here.

On Edinburgh Live he said: “I’ve been a Hearts fan since I studied ELT at Stirling uni in 1998.

“In the summer of 2016 my mother was diagnosed with stage 4 glioblastoma and a few weeks later I decided to run the local half marathon to give her some strength or maybe for psychological reasons.

“I bought a Hearts short on eBay – I loved the team for their fascinating story of World War I and made it to the finish.

Niko with his two daughters Nasia and Mimi.

“As expected, my mother passed away in December 2017. Since then, I have run 10k races, half and full marathons and trail races in her honor.

“Things have changed a lot since I posted on a Hearts facebook group.

“I made dozens of friends and in 2019 a fan suggested my fundraiser.

“In May 2019 I returned to Scotland for the Edinburgh Half Marathon, raised money for Macmillan Cancer and crossed the finish line.

The top Niko will walk in.

“The day before the race, ten fans had taken me to the cup final, three of them had paid for the ticket and received various gifts.

“I stayed for a few days, attended uni and traveled back to Greece.

“In 2020 I have been raising money for Children with Cancer UK as I am doing this year. However, in general I try to participate in as many races as possible, my free time is limited as I teach in the private sector and I am a father of 2 girls .

“As for Euan, I was just reading about him in a Hearts group and instinctively decided to walk my 51st in his honor.

“I will take the jersey to Edinburgh on May 29. I will be running half for Children with Cancer UK.

“I hope I will find a way to give it to his family.”

He added movingly: “I don’t feel like I’m doing anything special. I just want to keep the memory of my mother alive and motivated to go for a run.

“Jambos are my ‘fuel’ and I am extremely proud to be part of this family.”

Many have been touched by the spirit of the selfless fan.

Reg & Barbara Young said, “Well done, Niko. You should be proud of your hard work.”

Peter Smith exclaimed: “I don’t know how you do M8 Total Respect One Was enough for me.”

While John Cramb added, “Keep it up! Good luck.”