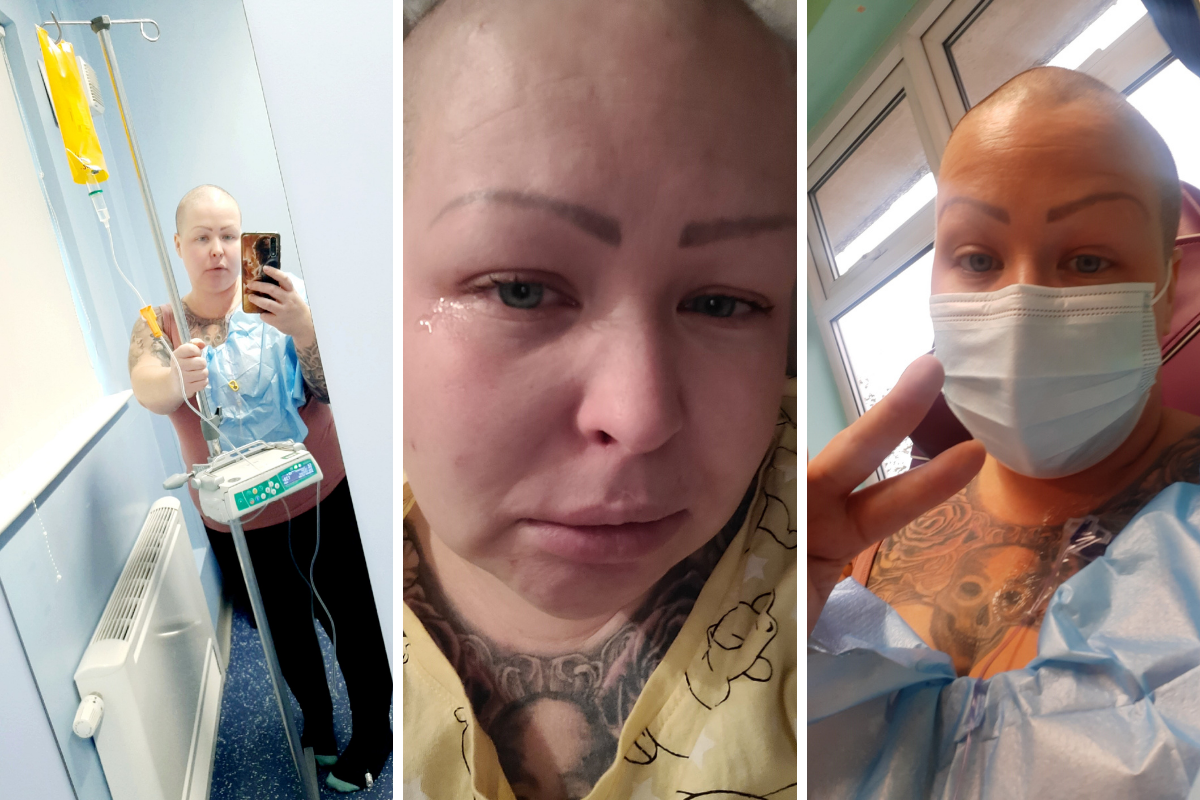 Bolton: Mum of four opens up about breast cancer

A thirty-four-year-old mother had to tell her four children the heartbreaking news that she had breast cancer after being diagnosed just before Christmas last year.

Jodie Robinson of Breightmet was working two jobs before hearing the devastating news and had to quit her job as a caregiver.

Jodie’s youngest, three-year-old Lilly, found it the most difficult and “couldn’t understand” why her mother’s hair had fallen out.

Jodie said: “The diagnosis is the hardest.

“My advisor said if they found the lump just a week later, it would have spread to my lymph nodes.

“My daughter Lilly would ask me ‘don’t you have cancer? Because cancer makes you cry’.

Lillie and Alexis hug each other with sunglasses on

“It was very hard for her to be away from daycare and have to stay with her father while I was on chemo.”

At such a young age, Jodie will also have to undergo a double mastectomy, which she still has to ‘learn to live with’.

She admitted that being a woman is very difficult to deal with, especially when she’s “pretty young.”

Jodie added: “If I had been older I might have embraced it more but I don’t know because I’m still coming to terms with it.

“I’m usually quite fizzy and tend to brush off a lot.

‘But this just puts you at the bottom and it’s a lonely place.

“I’m still anxious and stressed, but I keep going for the kids.”

Jodie in sunglasses with her oldest Bethany

Due to the aggressive chemotherapy that Jodie had to go through, she had to be treated every third week, which meant it was close to Christmas Day, her birthday, and New Year’s Day.

She added: “I felt like I wasn’t getting a break.

“But I thought I had no choice, I have to do it.

“I felt the best I’d felt for a long time as I continued working with my work and the kids, and then I found the lump.

“But I was feeling quite tired and unwell, which could also be symptoms.”

Something Jodie hadn’t expected was the end of some friendships she’d had for 20 years, including at a time when visitors weren’t allowed to enter hospitals, adding to the feeling of loneliness.

She said: “When I was diagnosed, there were no friends I had for 20 years.

“After twenty years you expect people to be at your door, but for some reason a lot of people disappeared when I got my diagnosis.

“Strangers and people on social media, however, have expressed their support.

“It’s a lonely place and I’ve been very alone.

“But some good friends have organized some fundraisers for me, which was great.”

Jodie hugs her friend Natasha and rings the bell

Jodie has urged everyone to “check their bits” and make an appointment if they have a lump, because “it’s better to be safe than sorry.”

It was only by randomly finding a lump that Jodie went to check.

She said: “Everyone should check their bit if they think they have a lump because it’s so important.

“If it can prevent one person from getting cancer, that’s the most important thing.”

Jodie also said it’s very important that people be checked for the Bracker gene, which can be inherited from your mother’s or father’s family, “because not many people know about it.”

By being tested for this gene, the chance of developing breast or ovarian cancer in the future can be shown and surgery can be prevented.

She said, “Both my mother’s and my father’s side had cancer, but I didn’t know I had the BRCA1 gene until I was diagnosed with aggressive breast cancer and went into family history, and then they tested me for it.”

Jodie’s siblings and children now need to be tested for the gene to make sure they don’t have it.

Bethany, who will be 18 in the coming weeks, is now being tested for it.

Before Jodie knew what was in store for her, she helped a friend in need who had a few children, who was hit by the pandemic, and was struggling with her mental health.

She said: “I wanted to know what I could help with with food and presents for Christmas and the community in Bolton has been so supportive.

“There were enough presents for 27 children.

“They’ve all done the same for me with my cancer.”

Jodie had her last chemotherapy on March 11 and rang the doorbell.

She is currently halfway through her chemotherapy and is due to undergo her double mastectomy on April 19.

You can help support Jodie through the GoFundMe fundraiser here.